Wearing Panties as a Punishment and Making Him a Sissy 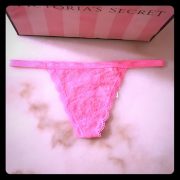 He struts around wearing panties.

Wearing panties was something my boyfriend never thought he’d be doing. He was always playing the macho man. He was the alpha male type at the start and I slowly worked him down to his deepest, dirty little desires. It started off as just a normal day. I was hanging out at my fuck buddy’s apartment, just laying around on the couch while he was busy playing video games. I was half-ass paying attention, mostly just teasing him. Sometimes I’d throw cheeky little insults because we both fire back and get really into it. It’s a fun little game.

He was arguing with someone online about who “wears the pants” in our little “relationship”. All guys seem to fall into that little ‘alpha male’ show-off argument when they’re among themselves. It was like a locker-room conversation. He was the typical cocky fuck and said that he wears them. I rolled my eyes, dramatic as possible as I stuck my tongue out at him. He saw it immediately and made a very literal remark about me not fitting in his pants, and how they’d just fall down. I remembered seeing a joke about that somewhere, so I fired back.

He didn’t expect that I’d take it literally.

“Yeah..well, you can’t fit in my panties,” I joked. He just looked confused. “Wait, what? so what if I can’t fit in them?” He was pretty lost. My joke went right over his head. “Then you’ll never get in them. If I can’t wear your pants, you can’t wear my panties. That’s why you wear the pants in the relationship, and you’re so not getting laid.” His face looked like a mix between a very sad puppy, and very unimpressed. He was about to call me out on a terrible joke. I saw the gears turning in his head. But instead, he challenged me, saying he could totally wear them.  Imagine my surprise when he agreed to wear them for an entire day, just to prove a point.

He said he would wear any pair that I chose. He’d just accepted wearing panties as a challenge. I went from the sweet, sarcastic girlfriend to a very sadistic brat, in the matter of a second. The idea made me feel so mean that I was downright giddy about it. I ran right towards the bedroom, to the little stash of “extra” clothes I’d conveniently left at his house. He never really cared that I kept a little stash of sexy lingerie and back-up panties. He often looked at them and immediately fantasized about how I’d look in them. Plus, you know what girls do..we mark our territory with clothes and lingerie.

I forbid him from looking while I went through a few pairs.

After all, I had to pick out the perfect set. All the evil gears were working hard in my head. I could make him wear the little lacey, pink ones. Oh, I knew he would hate the feeling of lace against his dick! Though I couldn’t help but wonder if he might like the softer lace instead. Sometimes, even I hated how “rough” some lace panties felt. Some panties are so soft that you can’t even tell they’re on. I thought about it some more, thinking of which pair would make wearing panties unbearable for him. Then I saw the tiny, purple and pink panties with hearts on them. That particular pair were frilly and girly enough to emasculate him instantly.

You should have seen his face when I walked back out.

I let that tiny g-string hang from a finger, so he could get a good look at how frilly and small they were. He was not happy, and I didn’t care. He should have known that I love playing with kinks, and I’m not afraid to use them as a punishment for him. Since he was always being such a cocky little asshole, I used all the fun I’d had with fetish phone sex to punish and work him over the edge.