When I worked for an underground sex dungeon: Daddy didn’t know I was involved! 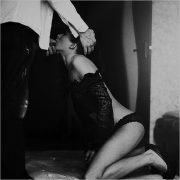 You can find an underground sex dungeon in many places if you just look hard enough!

Have you ever been to an underground sex dungeon? They really are not as intimidating as you would expect them to be.  I worked there, not as a sex slave, but as a well-paid escort. It is a common opinion that the individuals in these high-class clubs are underaged products of sex trafficking. Well, if I was a product of sex trafficking, then I was most certainly compensated. With no pimp involved, it possessed more of a red light district feel. Like if a brothel and a resort made plans together. Most men that participated were involved through business, as some sort of retreat. I met this dancer at a gas station when my family and I were on a road trip. I told her that I loved her outfit.

She wore bleach washed booty shorts and a red suede top with a black studded leather jacket. She stood in these sharp black and red pumps and had these big hoop earrings. We talked for a moment and she told me I looked cute. She let me know that if I was ever looking for some work she knew a place that paid through the nose, near where I said I lived. I lacked interest in working at the time, but soon after, my daddy caught me fucking a boy on our couch in the basement. We were covered with a blanket, but I was clearly straddling him. Afterward, daddy and I talked about how boys couldn’t come over past 9 pm and how I got cut off plus grounded.

Later, I stopped showing up at home after school and when they prodded, I let them know that they couldn’t theoretically make me come home.

And they couldn’t. What were they going to do, drag me home kicking and screaming? Call the cops? They thought I stayed at a friends house or a boys house when really, I worked at this pricey gentleman’s club and got my face fucked and making enough money to leave them for good. Some of the guys acted a little rough, but nothing that I really protested to, unless they wanted it like that. I got to wear a mask and pictures were forbidden to protect us and the company. Very secluded little underground sex dungeon and not a place you wanted the cops searching around, so the customers and employees maintained safety. I’ve now worked dishwashing jobs much worse.

We had special nights where orgies took place and what not. Men could line us up. We said a little spiel about ourselves and what we like. The highest bidders got the first choice in a girl and the men remained without a mask. The girl who made the most the night before got her first pick in a guy. The guy could, of course, reject, however, that rarely occurred. I happened to make the most the night before that night, so the choice remained mine. I looked out on the crowd of guys and to my shock, I saw my dad. There he stood in a 3 piece suit just like the rest of them. He had no idea who I was! He wasn’t there to catch me, otherwise, he would have dragged me out by my hair! Daddy was a customer at the underground sex dungeon!

Call me for some taboo phone sex! Read more of my blogs for young pussy!