Two Big Black Cocks Pound me on the Dance Floor 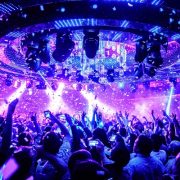 Two Big Black Cocks are Better than One

It’s always a good weekend to go on the hunt for some big black cock. I never failed to bring home a hot black guy from a club, or on really good nights, I’d come home with two big black cocks to fuck. I wore a tight black mini dress with no underwear, of course. And, to satisfy my high heel fetish, I wore my new favorite blood red sky-high stilettos and hit the clubs with my girlfriends. As usual, my mini dress got me a lot of attention. The music was thumping and the red and blue lights were strobing around us on the dance floor. Two hot black guys approached me as I was dancing. Both were tall and built with heads cleanly shaved, just my type. Right then I knew this was going to be one of my luckier nights.

Instead of showing interest, I played coy and let them make the first move. I strutted my moves, swaying my hips and casually pulling my skirt up to the bottom of my ass cheeks. The guys starred, entranced. They watched closely, hoping for a peek under my dress. Finally, they danced closer and closer to me, one in front of me and the other behind me. The guy behind me started grinding his crotch between my ass cheeks. His massive dick got harder and harder as I grinded back. Glancing back, I flirted with my most sultry looks.

I was playing hard to get with the guy in front of me, knowing full well this would make him want me more. A little jealousy is the perfect method of control over hot men. They never expect to be ignored, so when they are, it ignites a fire inside them and they want me all the more.

Grinding to the Beat

Just as I predicted, the guy in front of me, tired of being ignored, put his hands on my swaying hips and started caressing the sides of my ass. He leaned even closer and I was being sandwiched between two big black cocks and I was loving it.

The music pulsed through our bodies as the three of us swayed and grinded to the beat. I now had my hands all over the chest and biceps of the guy in front of me, desiring more of his body. He leaned down and kissed me deeply. Then I wrapped my arms around his neck and raised my leg to his hip, he held it there. The guy behind me just pressed closer and took this opportunity to put his hand up my skirt. Immediately, he began rubbing my bald pussy and quickly put two of his fingers inside me. I gasped while still clinging to the guy in front of me and thrusted on the fingers of the guy behind me.

For a second, I glanced around to see if anyone noticed but the dance floor was so full that no one seemed to. Everyone’s attention was only on the person they were grinding with.

That’s when the guy I was kissing started to unzip his pants. The guy behind me moved his hands to my bare ass, grabbing my cheeks and caressing my tiny asshole. The guy in front kept hold of my leg on his hip. With one hand, he whipped out his big black cock and slowly pushed himself inside me. In ecstasy, I moaned and groaned but no one could hear me over the loud music. He pumped himself steadily in and out of my tight wet pussy.

Suddenly, I felt the guy behind me spreading my ass cheeks! His huge black dick pushed through my tiny asshole and I cried out in pleasure. The excitement of getting pounded by two big black cocks in public was so hot and thrilling I could barely take it. They got a nice rhythm going, one cock in my pussy, one cock stretching my asshole, in and out, in and out. “Yes, yes, I’m cumming!” I panted. Both my holes tightened even more on both cocks and I spasm and orgasm right there on the dance floor. At that instant, I can feel both cocks twitching and spilling their hot loads deep inside me.

Instead of fulfilling my big black cock craving this just ignited a deeper desire inside me. I knew I was going to want an encore with these two big black cocks, so I invited both guys back to my place for round two.

Call me for the best phone sex!