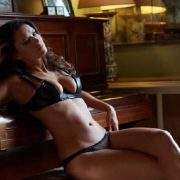 Fuck up within my inner circle and there’s gonna be some disturbing tortured humiliation family payback coming at you! Trust me! So, my younger sister married an idiot and no one could have been more ecstatic than I when she told me they were getting a divorce. I smelled it coming and I had just about had it with him when he started talking crap about her on social media. But, even then,  I figured “She chose that asshole. Plus, she’s a big girl. She can defend herself”. But when he brought my niece into it, I KNEW I had to make him cry like the little bitch he is. Game on, scumbag.

Furthermore, inviting him over under the pretext of playing peacemaker, was as good as any way to get him to stop by my place after work. I offered him a glass of scotch and you know what? That fool drank it, not knowing the special surprise I had dissolved into it. When he woke up, he was tied spread eagle on the tile floor of my living room wearing only his ugly-assed grandpa boxers. There was no way I wanted to see the disgusting blob of a so-called man naked; even though I knew at some point, I was going to have to. Especially if I wanted to make him scream like a little bitch! I wanted that baaaaad. LOL.

“You pathetic, putrid, ill-equipt, sad, little man (and I do mean little!)”, I said as he began to regain consciousness. “I don’t care what you say about my sister, Dip-shit! She can handle it! But, when you dragged my niece into your slime pit, you’re waking the dragon, demented asshole.”
I reached down and picked up a handful of the alligator clips I had laid out and held them up to his sweating, nervous face. FUCK! I LOVED that look! It’s something when a bully gets it back threefold of what he gave out to my sister and niece as well as everyone around him. That was coming to a screeching, slutty halt tonight!
So, when I placed one clamp on each of his nipples, he groaned in agony, like a punk. He didn’t like them clamped onto his armpits, either. But when I pulled on a pair of latex gloves and started applying them to his scrotum, oh, boy! He really started to cry like a little repentant bitch.

Is there a limit on how much tortured humiliation family payback there can be? I don’t think so! Haha.

Pushing the tip of my six-inch stiletto heel onto his cock, and lowering the weight on it slowly, his whimpers and moans were music to my ears. And it made me ooze at the thought of how much I enjoyed taking my anger out on this sorry excuse for a man. Taking the pressure off his dick momentarily, I reached down into my bag and pulled out a 12″ long 3″ thick dildo. I actually watched the tears well up in his eyes! YES! Bonus points for that.
“No, Joey, please not that!”, he whimpered.
“You should have thought of that before you bad-mouthed my niece, Donnie!” I snarled, as I pulled up on the ropes binding his legs and lifting them so they were pointing up at the ceiling. “Have you seen the Girl With The Dragon Tattooooo, Donnie?” He got more afraid every time I stretched out my words followed by his name. It’s an old wartime tactic on prisoners. And he was my prisoner after all. Giggle.

I asked him if he’d ever been fucked in the ass. That followed by an anxious look of fear that stayed on his face, told me he had. LOL. Quickly yanking up his boxers while laughing at his little dick; I wondered if I could even get that monster dildo up into that tight, possibly virgin man-pussy. So, I slapped some liquid heat onto the fake dong, and I pushed it hard against his aching pucker. I put all my weight behind it and tried slamming it home. And, after a couple of painful misses, I finally shoved the head of it straight up into his rectum. Jackpot! I giggled like a little girl.

What? You bet he was screaming and crying like a whore who knew he wouldn’t get PAID! Also, between the clamps on his most sensitive areas, the liquid heat burning his insides and the pressure of the huge fake phallus buried up to its balls in his ass I herd it. I knew it! “Please, Mistress! MOOOOOOORE!” he begged between sobs.

It makes me really happy to leave a man I once knew as my brother in a slimy cum-covered mess on the floor in front of me. And I was nowhere near finished yet! He needs the lessons he learned from me, his kid sister… in law, you know? But, all good things need a super strong finish. And, that’s something I’m really good at. So, I pinned him down again and made him take me down his throat. It was sort of an homage to my sister and niece. May that fucker always remember me and that I made him come to heel! Sometimes, a little bitch lesson is enough to straighten a man who’s gone down the wrong road, right.