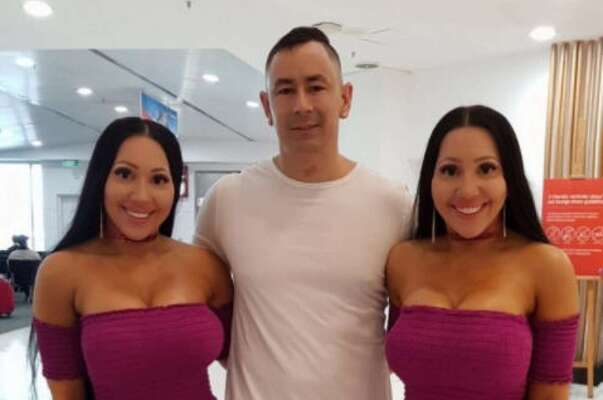 Titty fuck bonanza–I was the RA in charge of the girls’ dormitory, and I have to say, there were some especially juicy ones this year. My trick was to bust into the girls’ rooms–I had the master key–catch them in compromising positions, and hopefully put them into more. Today I had my sights on the twins, Marina and Katrina, two busty exchange students from Spain. I had noticed them at the Monster Smash party when they dressed as sexy zombies.

I was going to make sure the titty fuck bonanza train was full steam ahead. My armadillo was poking its head out of the top of my trousers, looking for a couple of nice mounds to hide in. I busted the door open in typical action-movie fashion like a real John McClane and saw Katrina quickly stashing something in a drawer.

Strolling over, I let a wicked grin spread across my face. Her light blue eyes looked up at me and blinked; her soft pink lower lip trembled. I opened the drawer and snatched the tiny satchel. “Mmm, contraband, eh?” I growled. My pants flew open and my hard cock raged out. “Take off your top,” I commanded.

The titty fuck bonanza was on. Katrina quickly stripped, too scared to say anything lest she be shipped back to Spain in a plane of shame. Her beautiful tits bounced out, luscious, creamy, and with those perfect pink nipples hardening at the sight of my big cock. I nodded my head at some baby oil on her bureau. “Take that. You know what to do,” I said.

That hot Spanish blonde with big blue eyes fixed her gaze on me and slowly squeezed the tube so that a stream of oil covered her luscious tits. I was so ready for the titty fuck bonanza to begin. My cock practically begged to be buried in between those heavenly orbs. “Squeeze your tits together,” I commanded. She did it. Fuck.

I slid my cock in between that divine ravine and began to slide it up and down. Grinding in between her titties had to be the best feeling in the world. Tears of joy were streaming down my face as I smashed her tits around my throbbing dick. God that felt good. Speeding up, I grunted and looked at my helpless prey.

This was going to be the best titty fuck bonanza ever because the next thing that happened was Katrina’s twin Marina busted in the room. Marina was the sensuous brunette of the pair, exotic with long legs and a withering glare. “Get over here,” I growled. “Do what he says,” Katrina assented, “He found the stuff!”

Marina was much more willing. That gorgeous brunette dropped to her knees and lifted her shirt, revealing a perfect pair of olive-colored triple Ds. “Oh fuck,” I thought, and immediately switched to that lusty twin. Katrina kind of pouted. “Don’t worry, babe, I’ll be back.” There was more than enough dick to go around in this titty fuck bonanza.