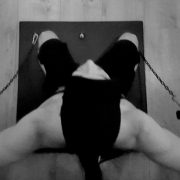 Tied bitch; by now you should realize that I am talking about you.  That promotion turned you into a fucking monster, and you’ve had such a shitty attitude around the office while drunk on your own power.  The guys were sick of it; especially when you were a little tease, too.  Don’t think they didn’t notice your juicy booty in those tight pants as you walked by.  It was almost as if you were saying, “look, but don’t touch.  I have the power now, boys.”  Well that was a mistake.

You’ve Got a Lot to Learn About Power

All you did was piss off the male staff while also turning them on.  Here’s a simple math equation to remember.  Pissed off + Hard on = Rape.  It was time to remind you what it felt like to not be so in control, and it was sooooo easy to pull off, too.  The first step was lacing your coffee, which wasn’t hard.  Now that you were a manager, you were suddenly too good to get your own coffee.  A sprinkle of a little something, and it was lights out for the new manager.

Waking Up a Tied Bitch

I’m sure you were shocked when you finally came around.  What did it feel like to be hanging from the ceiling with your legs spread and tied all the way back for easy access to your fuck pipe?  I don’t know why you even asked what was going on.  What other purpose would a position like that serve?  It was also hard to keep an air of mystique when all the men in the office surrounded you and had their dicks in their hands.  Frankly, it was pretty hard to get them to wait.  They wanted to rape your little bitch hole so badly while you slept, but I reminded them that you wouldn’t learn anything if you woke up after the fact.  Now you’re staring down the barrels of a bunch of large, disgruntled employees.  I guess you could call this a ‘team-building exercise’.

So weren’t you always bitching about efficiency?  It only makes sense to spit roast a piece of fuck meat like you.  The guys wasted no time putting that mouth to use while the first cock slammed into your other bitch pocket.  Fucking faggot.  We should have known this wasn’t your first time.  We might have gone a little easier on you if it had been.  Unfortunately, your whoring ways had earned you two cocks up your tight little snatch at once.  You must feel like a real slut having two massive cocks pumping in and out of your hole with such ease.   You certainly sound like one.  It’s gonna be really hard to maintain respect around the office now when everyone knows that you’re a little stretched out gay boy who likes his rape rough.

How many loads have you swallowed already?  Damn, you’re such a slut.  Why are we feeding you one cock at a time?

“Suck harder!” us girls shout as we cheer on the guys.  “Fuck his throat!”

Do You Feel That?

It’s the first of many loads that are going to fill your nasty hole up.  When I say fill up, I mean fill up.  Dozens of guys are waiting to ‘voice their grievances’ about the bossy bitch boy from upstairs.  So do you feel those massive balls slam against your chin as they face fuck your mouth?  What about the nuts tea-bagging your smug face?  This is your fault.  You didn’t know your place.  You thought that, just because you moved up the ladder, you weren’t still a little beta bitch fuck boy.  Well, you are, and we aren’t ever going to let you forget it.  Not the women, not the men, not anyone.

How’s That For Overtime?

Have you been getting a little uppity and fear your colleagues are going to treat you like a tied bitch, too?  If you fear getting raped down to size, call my phone sex line so I can help you know you place like a good little beta boy before it’s too late.