The Virgin Invasion: The Billionaire Secret Colonies of the Finest Part 3 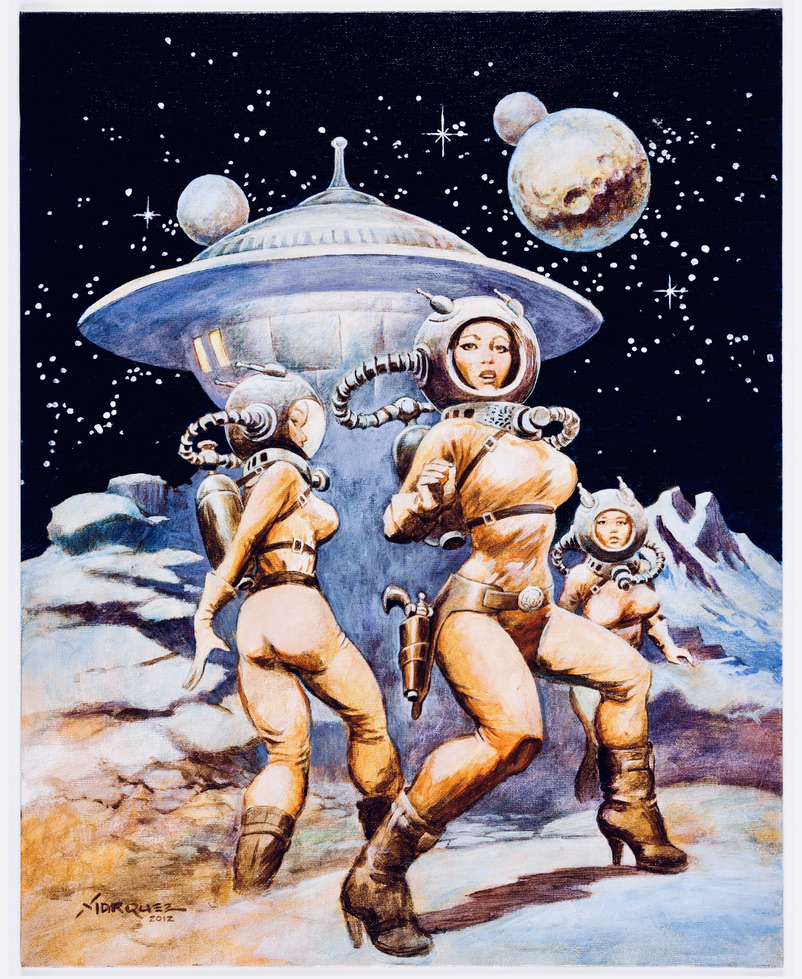 After my sexy little encounter, things started getting a little more fun while aboard the Amazonian.  Sex in space was hotter than I could have ever imagined.  In addition, every morning I woke up, running my usual 5 miles across the ship. I loved watching my admirers. I also loved all my fun new clothes. All I had to do was open my little screen next to my bed, pick out a few items, and voila! Same day delivery from our warehouse a galaxy over! Metallics were all the rage here. Little did I know how much everything would change once the virgin invasion began.

This babe was ready for the day.

I had my new metallic pink running shorts and bra ensemble together, and my hair was in a perfect high pony. I managed to sneak a 5 calorie energy bar to boot, I mean, could the day get any better? Everything was operating smoothly until the ship began to shake and the sirens began to scream “DANGER.” The girls began to be thrown off the indoor bridges with all the rattling of the vessel. Luckily their perfectly round bottoms saved the jezebels from enduring a terrible fall. The landing dock doors opened on the Amazonian.  A blonde man came zipping in on a hovercraft skateboard.  He shouted “THERE CAN ONLY BE ONE SPACE MAN.”

The virgin invasion had begun.

As soon as his lips closed the gates flooded with hundreds of blonde virgins. They outnumbered the jezebels three to one. All wearing the same red spandex leotards, they were out for blood.  They had pink guns that looked like plastic toys, yet they were very real.  One shot at me and chopped off half of my perfect pony tail! Before panic set in, I quickly remembered the prime room. The prime room was a place I discovered during one of my daily “curiosity” adventures while I spied on hot engine workers.  I grabbed as many jezebels as possible and told them to follow me. The virgin invasion had us outnumbered, but we had one thing over them, we weren’t all blondes.

The virgin invasion left our leader no where to be found.

Giving little care to the location of our bald inseminator, we continued our path to the panic room. In the meantime, he virgins came out from every corner. They seemed to be micro teleporting short distances throughout the ship. We managed to rangle a few after some decent pussy kicks and distracting them with our laser pointers we were given as part of our welcome keychain. We dragged them by their blonde bobs until we finally made our way past the engine room, to prime.

There was a man waiting behind the glass door.

He wouldn’t let us in! I took off the little clothes I had on and he pushed the door right open. I knocked him out by kicking the door into his face., then we tied up the virgins.  Looking out the window to space, I saw our leader take off in his mini dick shaped rocket, while leaving a very small trail behind him. “This is up to us now, girls.” I said as I turned back around. Looking at the door outside I could see the virgins squishing up against the glass door, trying to get to us and save their fellow bimbos. I scanned the room and saw the glass box. I hurried over and saw the bright blue button that read “FUCK BRANSON.”

Unsure of the meaning, I pushed it anyway.

Suddenly thousands of tiny drones came and lifted the virgins along with their male leader. Little portals in the ceiling opened and they were all shot into space. The virgin invasion was over. The jezebels and I all overjoyed, we stripped off all our clothes and fucked our way back to earth.