The Road to Glory — Behind the Glass Door! ♕ 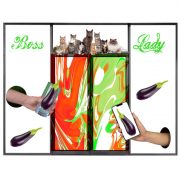 I have been working for this big technology company for over a year.  The company was trying to land this influential, financially well-endowed client, so everyone worked some extra shifts.  For the first time, I was able to get close to the boss. Not going to lie, I dreamt about fucking the company boss since I began working here. I even got to go into her office for a meeting.  It was weird; her office had another door in the back corner.  As the meeting went on, I could not help but wonder what was behind the glass door.  I had a daydream that there was this huge call center of phone sex workers with a sign that read “The Road to Glory is Behind the Glass Door,” but then I shrugged my shoulders and laughed it off.

I loved working for this company.  The hours were great, the pay and benefits were phenomenal, and my boss was young and hot!  She was tall, nearly six feet, and she was thin but curvy.  Her hair was always beautifully braided. I do not even know when she had time to have them done, but they always looked like she stepped out of a salon.  She was FUCKING HOT!  Boss Lady (that is what everyone called her) had radiant caramel-colored skin that was flawless, and she wore minimal makeup.  When she spoke, everyone hung on her every word, Men and Women alike.  Boss Lady was always sexy yet professional, charismatic yet never obnoxious, and gritty yet empathic; she was the total package. Of course, I wanted to fuck the company boss.

I continued to work on my portion of the presentation well into the evening.  When I was nearly done, I realized that I needed Boss Lady’s input for the final component.  When I get to her office, the door is open, but she is not inside.  Everything that she normally takes with her is still in the office – her phone, purse, and keys.  As I await her return, I see shadows flashing behind the glass door in the corner of her office.

I walk towards the door, and I hear music, some chatter but mostly loud moaning.  The closer I got to the door, the louder the moan got.  I gently push the door open.  I was not prepared for what I saw. There were NAKED people everywhere; no one was wearing clothes.  I’m sorry I was wrong; some of the women were wearing thigh-high boots and leather strap-ons!  No one noticed that I was standing in the doorway.  I never expected the road to glory to be behind the glass door.

This room was divided in half by a large piece of wood that had holes in it.  Lots of holes!  On the left side of the wall were nude men with their cocks inserted into holes on the lower part of the wall and their tongues hung out of the holes on the top half of the wall.  The men were bound to the wall with clamps on their neck, wrists, ankles.  They were unable to move.  Behind each man stood a woman with a whip wearing a mask, thigh-high boots, and a huge black strap on.  The men were being pegged or whipped or both.

The right side of the room had two levels.  The lower level, where the cocks were poking through the holes, women on their hands and knees slurping and gagging on some of the biggest schlongs I’ve ever seen.  Even when they were not hard, they hung over the hole at least five inches.  Still, others were on chairs with their legs in the air, and their pussies lined up with the cock of their choosing.  Thankfully, the men on the other side could not move, so the women were grinding and propelling themselves back and forth to achieve ecstasy.  The sounds in the room were sounds of gratification and sizzling passion.

The smell in the air whetted my appetite for sex and made me ravenous for an orgasm.  I walked to the upper level of the right side. Just like on the lower level, ladies were lining up, this time with their choosing tongues.  I saw my opportunity to partake in the road to glory that everyone was experiencing behind the glass door.

My Happy Ending . . .The Road to Glory Behind the Glass Door!

I took an empty chair, pushed it against the wall.  I lifted my dress to my waist and straddled the chair.  Aligning the opening to my pussy with the large, moist tongue protruding from the wall, I put my feet up on the wall.  He started to flick his tongue like the propeller on a boat, and I started to grind on his tongue.   Before long, we were both moaning.  I felt that sensation of pleasure alerting me that an orgasm was approaching then I came all over the wall and the chair.  I jumped up, pulled down my dress, and ran back through the glass door.

The Next Day! Behind the glass door…

I went to work the next day, thinking that someone saw me behind the glass door.  As I walked around the office, I recognized a few faces, but most women did not look the same with all their clothes on.  Of course, we were convincing; the new client that we were the best company for their business, and Boss Lady rewards everyone with a special in-house lunch spread, and bonuses would follow.  No one ever mentioned the road to glory behind the glass door, and I never spoke about it.

Every time I am in Boss Lay’s office, I look at the glass door, and I get this warm-tingly feeling over my body – – – the place of the most noteworthy orgasm I have ever had, and  I don’t even know his name!  I wonder if everyone knew we had a glory hole right in our office!