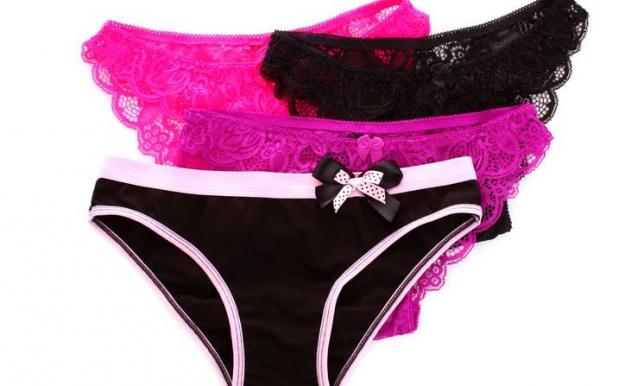 I attended a large family reunion for my husband’s family in the beautiful woods in Washington.  The hosts had rented a row of cabins on the river for their guests.  There were about twenty families in attendance and those who were not lucky enough to get a cabin pitched tents all along the river.  I didn’t know most of the other guests but I had a great time getting to know everyone.

On our last day, we were going to have one last barbeque together.  As dinner was being prepared, I went back to my cabin and began to pack up, gathering all my things. I was using a plastic bag for my worn clothing that needed washing and I rummaged through it.  I noticed there were all the shorts I had worn during the weekend, my bathing suit, tops… but no panties.  That was odd.  I dumped all the clothes on the floor of the cabin to have a better look and again, not a single panty in sight.

It was a mystery, but not one I was going to worry about.  During dinner, I made sure to have a quick chat with everyone to say goodbye until the next function.  When I approached one of my husband’s nephews, Christopher, he glanced away with a startled expression.

“Christopher? Is something wrong?” I asked.

He stuttered his response, “N-no.. I’m just…. nothing’s wrong.” His face reddened and he licked his lips nervously.

I smiled and sat next to him, wanting to know what was making this kid so nervous.

“I didn’t really get a chance to get to know you.  With so many other guests, it was kind of hard to chat with everyone.” I said.  He started to tap his fingers nervously on his leg as I spoke.  “You’re in high school, right? What grade?” I asked when he nodded.

“Third.  I mean Junior.” he said, his voice sounding shaky. “Eleventh grade.” he clarified.  It was obvious he was quite nervous and hiding something.  I had my suspicions and decided to move in for the kill.

I leaned close and said, “Whatever you did… you can tell me about it and I promise it will be just between us.  You just need to  come clean with me. Now. ” I said, looking directly into his eyes.  I was no longer smiling at him.  I saw the beads of sweat begin to rise on his upper lip.

He looked away and whispered, “I’m sorry.”

He glanced around to make sure nobody was watching, slowly pulled down his swim trunks to reveal my pink lace panties underneath.

“Those are NEW!” I cried.  I shook my head at him.  “You little panty thief.  You have the others in your cabin?  Let’s go.” I stood up and pointed toward his cabin.  He obediently began walking towards it, ahead of me.

He apologized on the way. “I’m sorry, I have never done anything like this before.  I just think you’re so pretty and I wanted to feel close to you because someone as pretty as you would never notice someone like me…”

When we got to his cabin, he handed over the other three panties.  I looked at them.  “Did you wear these as well?””  He nodded his head in affirmation.  I handed them back.  “You might as well keep them.”

He smiled for the first time.  “Really?” I laughed, touched by how such a small gesture obviously meant so much to him.

“Yes, really.  But tell me one thing… why exactly did you take them?  Did you just want to wear pretty panties or what’s the deal?”  I sat on the bed and waited for his answer.

“Honestly, I wanted to smell them and taste them.  I’ve always wanted to taste a woman’s pussy.  Then I thought it would be awesome to wear them because then my dick would be touching the same place that your pussy was touching.”  When he finished this short speech, his face was beet red.

“So were you able to taste my pussy to your satisfaction?” I asked.

“Not really.”  he answered, sounding disappointed.

“Okay, look.  You want to taste my pussy?  You have five minutes.”  I raised my sundress and pulled off my panties, letting them drop to the floor.  I was feeling generous and charitable.  He looked stunned as I put one foot on his bed and leaned back on my elbows.  “Get over here, Chris.”

He obeyed, scrambling quickly to the edge of his bed, falling to his knees and grabbing my hips as he dropped his face into my crotch.  He was like a starving man and his slurping and moaning was primitively erotic.  I closed my eyes and enjoyed his wild tongue on my pussy.  His enthusiasm made up for his lack of experience.  When his tongue swept over my clit, I shuddered and moaned and he was smart enough to realize that he found the sweet spot.  He began to press his tongue against my clit, alternating from long strokes to short, increasing and decreasing pressure.  What a quick learner this kid was! I responded by crying out and grabbing his hair, helping his movements along by pushing his head up and down.

When I orgasmed, the spasms were so strong and intense that I had to push his face away to stop the sweet torture.  I lay on his bed for a minute, panting and trying to pull myself together.  When I sat up, he was looking at me, waiting for approval it seemed.

“Chris,” I said as I stood up.  “That was amazing stuff.  You will make some lucky girl very happy some day.”  I bent over to scoop up my panties but they weren’t there.  I looked around the room.  “Wait.  Where are my panties?”

Chris looked at me innocently and shrugged his shoulders.  “I don’t know.  Are you sure you were wearing some when you came in?” he asked.

I looked at him in amazement and then laughed loudly.  “Okay you win, Chris.  You now have every pair of panties I brought on this trip.” He looked at me and shrugged his shoulders as if he didn’t comprehend.

“Come on.” I said, taking his hand and leading him out the door.  “The burgers smell delicious and I’m starving.”

Before we left, I casually asked Christopher’s mother when his birthday was and got their mailing address.  I’m sure you can imagine what sort of gift young Christopher will receive from his favorite Auntie, Sabrina.