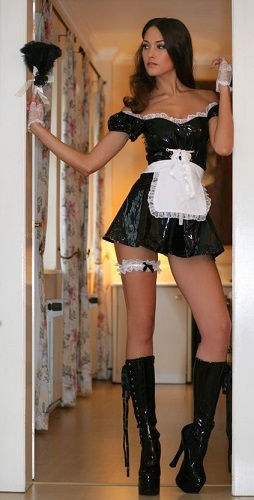 I’d gotten into some financial difficulty of late, I’d gotten behind on some payments and I’d bought some things I really should have waited and saved for and I realized that like it or not I was going to have to get some part time work to get out of this deepening hole I was in. I’d seen an ad online looking for a part time maid at one of the local upscale hotels. I’d always liked hotels, and I didn’t mind cleaning, I liked things very neat and tiny and clean, so I thought for a while maybe it wouldn’t be that bad.It might be fun,there was bound to be plenty of horny guests at this hotel.Not to mention plenty of rich guests.

I got down on the floor in front of him and took his cock in my hand and started to lick around the edge and taste the precum that was collecting at the tip of his cock. He was moaning and groaning again in no time at all. I massaged his balls and sucked and slurped on his cock for a few minutes and he came with great force in my mouth. Squirt after squirt hitting the back of my throat, his hand holding my head in place. I licked his cock clean and got up and he gave me three hundred in cash from his wallet and thanked me.