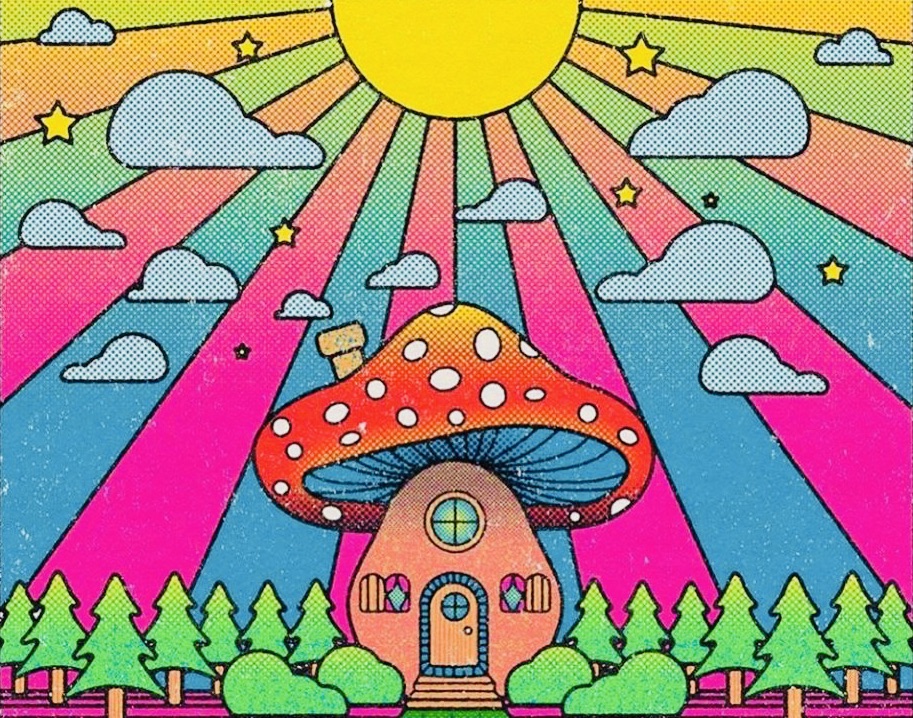 Steve woke up Wednesday morning, opening his eyes only to notice the bedside clock blinking. “Fuck did the power go out?” He said while angrily pulling his covers off. Walking to the kitchen to make coffee,  he opened the refrigerator door only to see that it must have broken during the power outage and all his groceries were getting warm. “Fuckin A.” He quickly pulled everything of importance out and figured he’d grab the beach cooler and get some ice from the bodega downstairs. He was almost there when he walked past his local bar, noticing it had some good music playing. “Fuck it, I’ll just grab one beer.” He walked in and took a seat at the bar not knowing the acid trip of his dreams would soon follow.

He noticed a guy come out of the restroom and take a seat close by.

The only way he could describe the man was like he was a sort of Sri Lankan Lebowski. He smelled like patchouli and his fanny pack seemed to be bursting at the seams. The man saw Steve staring and so he slid down to be a little closer. “Hey man, You party?” The hippie said with a big grin while holding his belted man-purse. “Uhhh, yeah, but I have to get ice for my food, my fridge…” Steve tried explaining before being interrupted. ” Whoa, whoa, man. Let me just show you what I got.” He opened his bag and took out a vial of some sort of liquid. Getting flashbacks of the acid trip he took a few years back.

“You see this? This is some Grade-A, Grateful Dead Shit right here.”

“The ACID trip of your wildest dreams. Some wild man juice right here.” Steve grabbed the vial from his hands. He looked at it, trying not to remind himself of his household responsibilities.  He looked at the guy and said “Alright, let’s do it.” The dropper came out and Steve watched as that single drop landed on his tongue and began to melt his soul. The lights became brighter and the music louder. Steve walked outside and found a pretty girl walking by. She opened the door to some abandoned Chinese restaurant and said “Come.” He followed her in. She led him down a hall and when she opened the doors, all his fantasies came true.

Every hot girl in Miami Beach was Naked and ready to go and this acid trip wasn’t about to stop him.

Positioned in every which way imaginable, they giggled and bounced their big tits while welcoming him in. Blondes, brunettes, and redheads swarmed him. They stripped him naked,  sucking and kissing every part of his body. He looked towards the ceiling wondering what he did in life to deserve this moment. A moment short-lived when a sexy Cubana sat on his face changing his view. He got up to find, Bella. A gorgeous Mexican girl, he knew he had to have. He picked her up and she sat on his lap just in time to get that nice big dick right inside her.

Suddenly he had a flash and found himself sitting on his couch in his apartment.

When he looked around, all of his warm fridge food surrounded him, seeming to have large holes in them. The jello, the lasagna, and then…he looked down to discover the beef burrito supreme neatly covering his entire cock ” Taco bell? Bella???? Taco BELLA!!!!!!!.

Enjoy The Acid Trip? There’s plenty more for those of you who like to get weird while having fun. Check out Fuck me Sideways for some more light reading, but be sure to Call Avalon for Hot Phone Sex.