Tease And Denial; Our Sexy Coworker Was Treated To A Trick 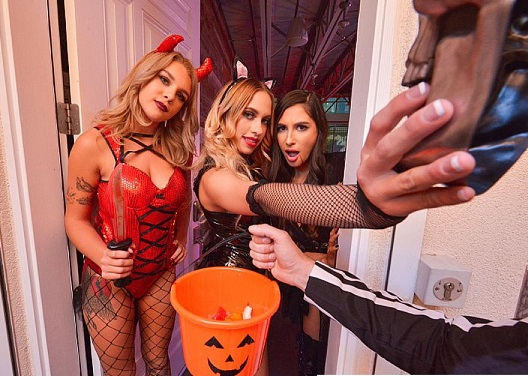 He Was So Hot But Very Cold

I’ve always thought tease and denial were fun. I’ve done it on several guys over the years that needed to be taught a lesson. There’s a new male coworker that is really hot. Several of the other lady staffers have also noticed him. We bet amongst ourselves who might be the first to bed him. For some reason, he’s been playing hard to get with all of us. He has shown no interest at all. We are also some fine-looking ladies, so there’s no reason for him to be ignoring us. One of the girls suggested he might be gay and that’s why. That too was decided against when he mentioned he was single again after a long relationship.

We Invited Him For Some Fun

So we tried leaning over his desk so he could see down our blouse. One of us went without panties and bent over in a short skirt. We did all sorts of things to entice him. Nope. He’s not having it. One day at lunch, I told the ladies about my past with tease and denial. I asked if they’d be up for some fun. They all enthusiastically agreed. We decided to tell him there was a staff get-together, a Halloween party. Everyone was going to be there and it would be a lot of fun. He agreed to come. What he didn’t know was that it was not an office get-together. It was a night of entertainment for the women he’d rejected.

A Little Tease And Denial Never Hurt Anyone

He arrived, and we were all dolled up in our costumes. He was as well. And He questioned where the others were. We said he was the first to arrive. The others would be there in a few minutes. We told him we’d set up a haunted house and had this vibrating bed that would knock people off of it. Would he like to see? He fell for it and sat down. He asked why it wasn’t vibrating. Before anyone could answer, we pushed him on his back and his ankles and wrists restrained. We blindfolded him and had him well tied up.

We Had Superman Under Control

He was dressed as Superman and we asked him just how “super” he really was. Then we started to undress him. Pull off his boots, his shorts, his tights. Guess he didn’t want panty lines, since he was wearing no underwear underneath. This fact elicited a few giggles and oohs and ahs from the ladies. He began to struggle, but he wasn’t going anywhere. One girl climbed up and straddled his face and commanded him to lick, which he did, seemingly reluctantly. The others were teasing his cock and got it erect. He was struggling to break free, but there wasn’t a chance of that happening.

Tease And Denial Was Fun

His Mouth Was Covered In Pussy

Who doesn’t like to be teased? Let’s Play with any kink you have with some hot phone sex. ! No limits!