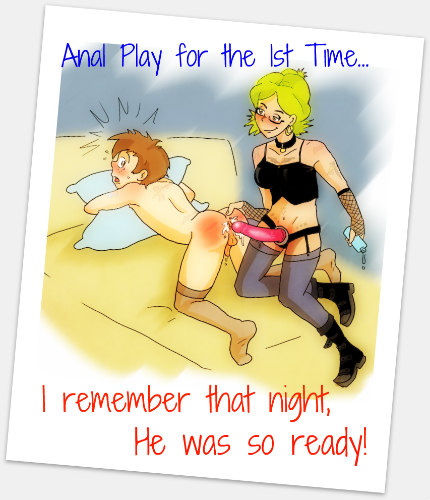 I found a really good anal play toy in the strap on isle, not a huge one, just a six inch one. It was nice and thick though! I was going to bet this was the right thing to do. I could almost hear him begging me to peg him in the ass with this. I was going to shock the hell out of him. When that night had come, I said I wanted to try something different and I hoped he’d like it, if not we didn’t have to, I smiled my wicked grin, and he looked at me so curiously. I went into the bathroom and put on the harness with the strap on now connected, and waited for his reaction. He sat up eyes wide mouth gaping open! His cock shot right up to attention! I’d had a gut feeling about this and was obviously right. It took no convincing to get him to play along.

He followed me to the bedroom where I forced him down on the bed face first, telling him to just lie back and take whatever I had in store for him. I loved him in this position, it was very submissive. I sucked on his cock a while and squeezed his balls, first soft and playful, then growing ever increasingly aggressive. And my anal play had not even begun! I was playing with him like he was my own personal fuck and suck toy. Very soon, he was sporting a throbbing and precum dripping fuckstick. I would say he was totally turned on. I had him get on his back and I pushed up his knees and lubed up the strap on and slid it inside of him slowly. His cock was hard as a rock and he was pumping it in his hand as I fucked him right up the ass. It didn’t take him long to shoot his load all over his own chest and belly and I fucked him right through his massive orgasm and then withdrew. He was one happy fucked slut! But it was no time for resting, for after I finished fucking him I crawled right up on his face and sat my sweet cunt on his lips and told him it was my turn!