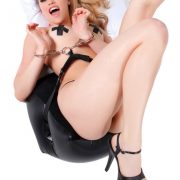 Simone’s daughter was always complaining to her Mom how needy her husband was for sex. They had two children together and she wished he would just leave her alone. Simone was not shocked when one day at lunch her daughter mentioned that she and her husband were talking about divorce.

I don’t understand you two. You have a perfect life. A great family and home. Why are you even contemplating divorce? Simone was exasperated with her daughter. Susanne her daughter, looked her straight in the eye and said. Mom, I don’t like having sex with him. He is too rough and I don’t like oral sex. Simone sat staring at her own child in shock.

After a few minutes, finally regaining her thoughts she looked at Susanne, let him have a mistress. Tell him to keep it discreet and unemotional and he can sleep around as long as your family does not get caught up in the crossfire. He gets his family and you get to be left alone. You could even have separate rooms.

Susanne, shaking her head. I don’t want to be wondering every time he leaves the house if he is going to see her.  Darling, your husband has needs. Instead, can you try to meet him halfway? Like what mom, she sighed.

Well, tell him you want more passion and less rough sex and you will try harder with oral sex. Perhaps, if you could make your sex life better than you will both rethink this divorce shit!  Simone shook her head because she knew even as she was giving her the proposition that he would never do that at least without incentive. Men need to have sex how they want. They will get it from somewhere. A lesson for her to learn later, in the meantime Simone smelled an opportunity. An opportunity for some sexy taboo family fun.

Simone made lots of passes with Daniel over the last week since the talk with Susanne. He was interested she could tell so the night of the party Simone made her escape and followed him upstairs. Walking into the room she smiled at him. He grinned and said I will be down soon, Mom. He had always called her Mom.

I know you are wanting a divorce.

She walked over and slid her hand up his back. His eyes grew heavy with lust and he looked toward the door and back to her. Finally, he turned swiftly and pulled her into his embrace. After a long heated kiss, she backed away.

Panting heavily, Daniel we need to talk about something. He interrupted, you have been throwing yourself at me so how about some family fun, he said. Then he pulled her in for another long kiss. Stop, please I know you and Susanne are getting divorced, she said. He looked at her skeptically, I am not leaving my wife for you, Simone.

He turned to leave. I never wanted you to, in fact, I absolutely don’t want you to leave your wife at all, she said emphatically.  Listen, babe, I know the reason you’re wanting a divorce is that she doesn’t like sex. I am just proposing a bit of taboo family fun. However,  what if you let me satisfy all those needs for you and not split up your family, she asked?

He stood facing the door. She was anxious about his answer. She was in a sexless marriage and so was he and she knew from everything her daughter had told her that the two of them would be a good fit sexually.

So they struck a deal, he would pretend to be happier with his wife’s concessions and fuck his mommy in law on the side. They would all be happier for it!

Do you want mommy phone sex? Mention this blog and get 5 minutes of free phone sex.