TABOO BLACKMAIL FANTASY: What Would You Do To Keep Your Medical License, Doctor? ♕ 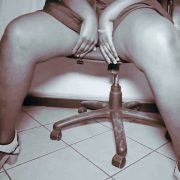 Here’s a taboo blackmail fantasy that’s not even a little bit “PC.”

Much to my perverted delight, one of my regular callers regaled me with a taboo blackmail fantasy this afternoon. My client is a licensed doctor and has been working in his field for many years. In his earlier days of practice, a patient asked him to be her “plus one” to a dinner party. Sounds innocuous enough, right? c

After some internal debate about the ethics of accepting such a proposition, my client agreed to join her. Surprise, surprise, the atmosphere of this dinner party was a little “date-ier” than he’d anticipated. Unbeknownst to him, his patient had been hyping up her “date, the doctor” since his reluctant invite acceptance. Despite feeling a little flustered at first, after a night of drinks and merriment, his trepidations dissolved.

Now, remember how my caller was torn about being her “plus-one”? He eventually trusted his patient would, like him, be discreet. Unfortunately, her filter-less degenerative condition guarantees a shameless lack of discretion. And, context-less, uncouth shamelessness generally!

Enter me, her younger caretaker sister and “advocate.”

And then I show up at your office door the following Monday morning. Without my sister.

I tell you I’m on to the unprofessional relationship you’ve conducted with my sister. And I don’t care how long ago it was. The board still wouldn’t approve. Would they?

There are no limits to what I’ll force you to do during our taboo blackmail fantasy role play. Will I simply extort you? Maybe I’ll make you give me the same pleasure you gave my sister? Or maybe we’ll get really crazy. Maybe I’ll plant my alien spawn deep inside you. Nothing like revenge splorching!

You don’t have to keep scrolling through phone sex numbers anymore. I’m the no taboos, no limits FREAK (i.e. dream girl) you’ve been looking for!