A Swingers Club And Being Watched ~I Love Voyeur Sex!* 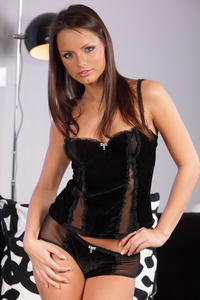 A Swingers Club And Being Watched ~I Love Voyeur Sex

A  Swingers Club usually has a great rule: couples and single women only. They’ll let a few single guys in but not many. I’m currently single but I still have needs like sex and excitement so thought I’d hit up the nearest swingers Club and see what kind of trouble I could get into. I put on a tight, super short red dress, thong and heels then put on just enough makeup to make me look hot without being trashy.

I mingled a bit, got hit on by a few couples and made out with some of them but none of them really grabbed my attention. A guy came up to me and flirted with me a bit, touching my arm and telling me things I wanted to hear. He was a charmer and I asked where his partner was.  He took me into one of the voyeur rooms and saw a woman leaning against the wall and touching herself while a couple of guys watched and touched themselves. She looked at us and he went over to her, kissing her in front of us.

I guessed she was his wife because she looked at me and said that he’d chosen a pretty one.

He said he’d chosen the best there tonight and took my dress off. He cupped my pussy with his hand and pushed a finger up, touching me through my thong. A wet spot formed on it and I pushed down on him, needing more in me. He took his hand away and slipped off my thong then I kicked my heels off. His wife watched us as we went to the bed and I knew that the other guys were now interested in us.

The husband laid down, pulling me on top of him and I kissed him as I rubbed my body against his.

His dick was hard and it pressed on me as I flicked my tongue against his. I shifted, reached down and put my hand over his dick. I stroked him as we kissed and I felt pre-cum dribble onto my fingers. He pushed against my palm and moaned. He rolled me onto my back and I put my legs around him as he kept on fucking me. I looked over at my audience and my pussy gushed as the thrill of being watched filled me.
I rolled my hips forward, moving with him as he pounded my aching pussy. Groans slipped out as he went harder and I gripped hi arm. My nails biting into him as I begged him not to stop. His wife stared at me as her fingers moved faster in her pussy and I came hard, crying out as sharp tingles filled me. He panted on me and his dick slammed into my soaking pussy. The feeling passed and my sensitive pussy made me shudder as his dick went in deep.

After a few more thrusts he came and shot his load in me.

One Reply to “A Swingers Club And Being Watched ~I Love Voyeur Sex!*”