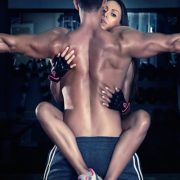 Sweaty gym sex – sounds pretty hot, right? It’s been on my bucket list for quite some time! So needless to say, I was more than happy to make this fantasy sex story a kinky reality for me!

The gym I go to has some of the best equipment, and to boot, the hottest men. I won’t even lie. I bought my membership because of the sexy kickboxing instructor I noticed in the corner of my eye while signing the agreement. For me, it was more of an agreement to have sweaty gym sex with this rugged, muscular man. He immediately made me think of one of those men from those erotic books idiotic women love so much. I’m talking about the books starring tall, gorgeous strangers of the male species with lavish blonde hair, usually called Fabio.

This guy wasn’t exactly your typical Fabio – he had more of a dark, mysterious flair from a far away exotic land. Even from where I stood, he smelled delicious, and made me crave him even more. Needless to say, I signed up immediately for his kickboxing classes.

For a week or two, I was content working on my punches and kicks with him as he corrected my stance from behind me. Then I’d go home and finger fuck myself fantasizing about having sweaty gym sex with this enticing & enigmatic God.

One day, as he was correcting my stance, I slightly back up into him just to gauge his reaction. There was no need to turn around – I instantly felt his huge boner pressing up against me. When the class was over, he told me he offered private lessons to exclusive clients. Why was I exclusive? Who cares, I wanted to get to know him, and if that meant paying a little more so I could eye fuck him, I would pay it. He told me he had a slot open for me in the evening, and I could take it before someone else did. I snatched that right up. It was an offer I couldn’t refuse.

So the place was shut down, the was music off, and we were alone in the room. He came up behind me, pulling my backside to his chest, and all of this to (supposedly) show me how to throw a punch. With his arms on my own, he directed them forward, telling me what part to hit when we sparred. Fuck, I wanted to do a lot more than spar with him!

With my kickboxing gloves on, I landed the first hit to his chest, but he swept his leg behind mine, knocking me flat on my back. Fuck, I wanted him even more. I could see the outline of his massive cock in his pants. Reaching for his hand, I yanked hard, pulling him to land on top of me. My pulse raced when he smiled with a devious grin, one hand pinning me to the mat, and the other cupping my pussy through my yoga pants. His fingers were pressing tight enough to massage my clit. Moaning, I arched my back and knew at that moment, I would be getting the sweaty gym sex that I’d fantasized for weeks now.

“This is why you can’t let your guard down,” he said, smirking as his hand yanked down my pants. “I’ve been wanting to fuck you for a while now.”

This was getting crazy. We were going to fuck right there on the mat!

Ummmm did I really need to think about that?