Turning My Boyfriend Into a Submissive Panty Boy (Part One) ♕ 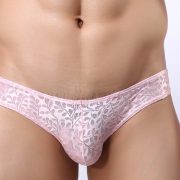 Turning My Boyfriend Into a Submissive Panty Boy

When my boyfriend and I first met, there were instant sparks. For our first date, we went to the bar just down the street from my job. He was looking so handsome in his suit and tie. I was looking quite radiant in my short black dress. As we got to know each other over a few drinks, I made the first move. With his eyes locked on mine, I started to slide my red thong down my legs under my dress. I placed them in his lap and waited for his reaction. His eyes nearly fell out of his head as he quickly grabbed my panties and pushed them into his pocket. It was obvious at that point that he had never been with a girl as sexually open or adventurous as me.

He kept a hold of my panties as they hid away in his pocket. I could see his fingers playing with them as he talked to me. He tried to conceal his growing cock, but there was no hiding it from me. I loved watching him try to contain himself. It was so entertaining to me that I couldn’t help but to laugh and tease him. He loved my little giggle. We clicked so well for being so different. Me being so outgoing and him being so shy and reserved.

After our drinks we went out to his truck and I gave him another taste of my dangerously sexy temptations. I pushed him up against the door and kissed him. His hands reached around and grabbed my ass. I felt the back of my dress lifting up and I was growing more and more excited at the thought of someone seeing us. Then I reached behind him and opened up the truck door. He climbed in first and I climbed up on top of him.

There was so much passion between us. I kissed him deeply as I pulled his pants around his thighs. As my panties were already in his pocket, it was easy to guide him right to my tight wet hole. I rode him right there in the parking lot. And that was that. We were already madly in love and I had him wrapped around my little finger!

On our second date, we went to a nice restaurant for dinner. He should have known that I would pull a similar stunt as our first date given the amazing result. Right after the waiter took our drink order, I pulled off my panties and set them on the table in front of my boyfriend. Again, his eyes bulged and he quickly picked them up to hide them. I reached out for his hand and pulled him in closer. Then, I whispered in his ear the naughty thing I hoped he would do for me. Could he really be my submissive panty boy? It was worth a shot!

“Go put on those panties.”

He looked at me in disbelief and asked me to repeat myself.

“I said, go put on those panties. It would turn me on so much if you did! No one is going to know. It’s just for me. Remember what happened on our first date? Put them on and see what will happen this time.”

My submissive panty boy came out of the bathroom wearing my purple panties tucked tightly into his pants. His cheeks were beet red because he thought everyone would notice the panty line in his pants. When he made it to the table, I made him pull up his shirt and show me the panties he put on. I was so excited to see his bulge peeking through as he sat back down in front of me.

After the waiter dropped off our plates, I started to tease my boyfriend through his pants and panties with my barefoot. He was trying to play off his quiet moans as a reaction to his meal. We both knew he was edging himself in those panties. After dinner, I took him out to the truck to recreate our hot first date. Only this time, when I pulled down his pants, I left the panties on and pulled his cock out from the leg hole. He came even harder this time than before.

Fast forward a few weeks. I came home one day with a shopping bag full of new panties. My boyfriend who is now obsessed with my panties because of our public panty exchanges was so excited for me to try them on. That’s when I told him that these panties were not for me, but for him! He looked as shocked as he did on our first date.
“That’s right, babe! These panties are for you! After you put on my panties at the restaurant, I just want to see you wear them all the time! They look so good on you and they really turn me on!”

He was hesitant of course, but my pouty lips convinced him to try them on. I bought him seven pairs. One for every day of the week. They were all different fabrics and styles, and he said that all of them were comfy and cute. So, we agreed. I would throw away all of his old boxers and he would wear these new panties I bought for him. It would be our naughty little secret!

So, he did. He wore those panties every day. My submissive panty boy was wearing his panties to work, to dinner with his family, and to bed with me. He loves when I pull them to the side and tease his cock. The masculine man in a suit was no longer the man that I was dating. I had turned my boyfriend into a full-on sissy.

With life getting in the way, over time, my boyfriend and I found ourselves not having as much sex. One day I came home to find my submissive panty boy sniffing a pair of my panties while jacking off in his own panties. I was enraged!

“What the fuck are you doing? You dirty panty sniffing pervert, are you really jacking off on the couch right now?”

It had been a while, I will admit. BUT he wasn’t the only one with needs here! So, I did what any angry girlfriend would do. I went out and bought a new cock cage for my submissive panty boy.

Find out what I did with the cock cage next Saturday! Or find me at Phone Sex Kingdom, call me up, and get your answer today!