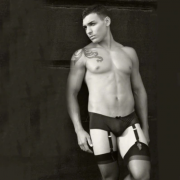 Pretty princess slut guest post time! This week’s post comes to us courtesy of one of my favorite sissy submissive men – a pretty slut named Princess. Princess has fantasized about dressing up and being a slut for a long time.  But he has only recently started making his fantasies real. This pretty girl has agreed to let us all know what it has been like so far:

I gave her control of my orgasms…

I had to wear a pink thong under my clothes at work!

She had me edging myself in restaurants and sending her pictures as proof. And she had me rubbing my little dick at work. And on the couch while hiding it under a blanket from my wife.

Then I made the mistake of going too far like a bad pretty princess slut. I came in my panties while on the phone with her.  As punishment, one day that week I had to wear panties (a pink thong) under my clothes at work.

Then Stevie instructed me to get my first sex toy which was to be a butt plug.  (It actually turned out that she wanted me to get a SET of plugs).  It was clear I would not like the outcome if I didn’t follow through.  I got specific instructions on the plugs and it was up to me to figure out how to get them.  I was unable to have them shipped to the house for fear of my wife finding them.  So I found myself in the unenviable position of having to buy them in person.

I tried not to act like a pretty princess slut…

I went to an adult store and tried to act nonchalant and not at all like a pretty princess slut.  Of course, the 20-something clerk saw a middle-aged man nervously looking around and knew she needed to help.

I acted like it was a toy to try with my spouse but I have exactly zero doubt she knew I was full of it.  She talked me out of one set and even pulled another set from the shelf and out of the box.  She showed me how comfortable it would be (which I for sure wasn’t believing, lol).

Today I bought my first thigh high stockings and a pink bra.  Once again, Stevie had me send her pictures. This time questioning if my very rock hard dick was even 4 inches and having me edge in my office.  I love when she reminds me how I like to feel pretty and to think at least one girly thought a day for her.  I’m trained now to take the medium plug,  Stevie has even suggested that I need to make a lipstick ring on it when I suck it like a good pretty princess slut.

Thank you, Princess! It’s great to know what it’s been like for you and I know your life as a pretty princess slut will only continue to get better! You’re a very good girl…