My Stepfather is My Pay Pig – Part 7 ♕ 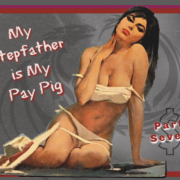 After the awful sound of the click, my evil stepdaughter said “if you ever want to so much as see your pathetic little dick again you’ll do what I say and give me whatever I want.  You can’t remove this cage without this key that I’m wearing on this chain around my neck. The cage is a tight fit and will be very painful if your sad little dick gets hard in there.  So try your best to stay soft.

I left my speechless stepfather paypig in his office without another word.  He definitely didn’t agree to my demands right away.  I expected this, of course.  He just needed some time to think.   He surely knew what he needed and wanted to do.  It was how to do it that he needed to figure out.

I understood that. But, at the same time, I wanted to go shopping with his AMEX card.  And I wanted to drive there in my new Mercedes.  I wanted these things now!  I bet that the first thing he was worried about was hiding all of this from my mother.  Once he figured that out, he would be free to work on my needs.  He probably needed a little push in that direction.

I thought that a combination of pleasure, frustration, and pain would help with that.  As I had explained to him earlier, the chastity cage I bought would be a tight fit for anyone.  I expected that he had a fairly small penis, which he did.  But it was a tiny bit bigger than I had anticipated, which was a good thing.

He was securely stuffed in the cage without much room to get hard.  And the little spikes inside would make it pretty painful if he tried. He had probably already discovered the painful spikes while he had probably tried to slip out of it.  I, obviously, had never experienced forced chastity.  But, the guy who had sold me this cruel device wore one, and he described what it was like.

He said he was locked in a hard steel tube where the inside dimensions are about the same as your unaroused state. If he started becoming aroused, his cock filled the space immediately.  And the spikes dug into the sensitive head, causing him pain.  He could get hard, but it couldn’t become anywhere close to all the way erect.  Both because there wasn’t room and because it was too painful.

Just what I needed!

My stepfather pay pig spent almost all of his time in his office now and was always down there alone.  I stripped down to my bra and panties and played with my nipples a bit to make them hard enough to see through my bra.  It didn’t take long – I was enjoying all of this a lot more than I expected. Then I snapped a few quick selfies and very quietly crept down the basement stairs to listen at his door.

The first test of the cock cage

He was very quiet in there, but I definitely heard a reaction when I texted him the first picture. I heard a groan when he first saw it, which I was sure meant he was getting aroused.  But that quickly turned into a more frustrating sound, which I guessed was when he tried to touch his cock but couldn’t.

Then, I heard a grunt of pain when he must have maxed out the space in his cage, causing the spikes to start digging in.  He sounded like he was in a lot more pain than I had anticipated.  “Maybe the cage was a little too small,” I thought.  Nevertheless, I sent another picture that was a little more revealing.  Which not surprisingly caused a distressed yelp of pain.

I abandoned my plan of sending the third picture and ran up the stairs.  I wanted to be as far away from that basement as possible.