My Stepfather is My Pay Pig – Part 2 ♕ 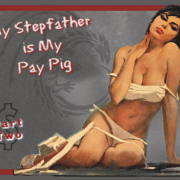 Stepfather pay pig – my bitch of a mother was right – I didn’t have a job and I was broke.  I had spent the last of my savings on my sweet new tattoo and I couldn’t depend on my boyfriends for money.

For one thing, they always dumped me when they inevitably caught me cheating.  And second, I’m always attracted to guys without money or jobs. I need to find a source of income as soon as possible. And I resolved that I would soon have a stepfather pay pig.

The check engine light in my car was on, and I dreaded taking it in for repairs.  I knew it would be expensive and of course, I didn’t have the money to pay for it.  So, I asked my potential stepfather pay pig to go there with me and make sure that they didn’t rip me off.  I didn’t really need his help talking to the mechanics, though.  My big bouncy breasts usually make them fall all over themselves to help me.

The magic of a low cut top and short shorts

But I wanted my stepdad to feel like I needed his expertise and that he was special to me.  When they presented me with an $800 repair bill,  I tried my best to seem upset and helpless. He stared at my big tits and my long legs all day since I had worn a low cut top and short shorts.  And when I asked him to help me with the bill, I gave my tits a little extra bounce.

I was thrilled that he immediately agreed to pay the entire bill.  I thanked him and gave him a big hug, making sure that he could feel my big breasts on his chest. In appreciation, on the way home, I practically let my tits spill out of my top, and I hiked up my shorts as far as they would go.  I drove so that he could safely drool and fantasize as much as he wanted.

He had an extreme reaction when I showed him my tattoo.  I could tell that he wanted to touch it very badly.  And I’m sure that he then went directly to his basement office and jerked off. I’ve also seen him lurking in the bathroom watching me by the pool.  I bet he almost had a stroke when I took my bikini top off.

Guys stare at me all the time. And I didn’t really mind him staring too. I didn’t know it at the time, but his lust for me would be very helpful in making him my stepfather pay pig!

Stepfather pay pig – private and far away from my mom

My stepdad spent a lot of time in his office.   And now I wanted to see what he was doing down there.  One day when I knew he would be at work, I took a look.

It looked like a normal office until I turned on his computer.  There were a lot of files on the desktop.  And my name was on a lot of them.  Some of the files were pictures, and some were videos.  I had thought he only hid down here to get away from my mom, but it seemed he had another reason as well.

The rest of the videos were a lot more concerning. I recognized all of them since I had taken all of them on my phone.  Naked selfies, pictures of me having sex with my boyfriends, and other private things were all right there on his desktop. I conveniently located for him to jerk off to.  It seemed that he hacked into my cloud, but I’m not sure how a guy still running Windows 7 could pull that off.

The pictures and the videos didn’t upset me very much.  I knew that I could use this to make sure that I had a stepfather pay pig as soon as possible.

Up next – we’ll hear from the stepdad again! Can’t get enough of my findom stories?  Check out Making You My Pay Pig – A Tale of Financial Domination (Part 1)