My Stepfather is My Pay Pig – Part 4 ♕ 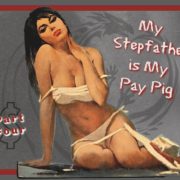 Stepfather pay pig – when my new personal ATM very eagerly agreed to take me shopping, I knew that I had him exactly where I wanted him. He was desperate to please me. And he was obsessed with getting and keeping my attention. I had made a good choice by making him wait for my response. I was new at this, but I think I was doing a good job so far!

If I had been candid with myself at the time, I would have realized that I was getting a lot more out of the arrangement than money. Very soon, his giving into my demands turned into him practically begging me to take money from him. At that point, I started to have an overwhelming need for the power I felt at every interaction we had.

I wanted to own him and control everything he did. It wasn’t enough for him to just buy things for me anymore. I needed every thought he had and every action he took to be for my benefit. I needed his obedience and lust for me to turn into worship. And I had to have serving me become the real sacrifice. It was evident that I needed more and more power.

Fortunately, my mother barely noticed. She had been paying very little attention to her new husband as it was. And she was probably relieved that he was leaving her alone. Little did she know that 100% of his focus was on me. And she never expected that he had become my stepfather pay pig! Or that he was giving up every bit of his power to my control.

I began to understand that he was getting as much pleasure out of our game as I was. The more I pushed him, the hornier he got. And since he never got to touch me or even look at me for very long, my mere presence was a powerful tool. One that would come in handy if he were to dare hesitate to obey my demands.

My next “request” was a big one. As you know, I was broke and unemployed. But if you assume that I’m uneducated, you’re wrong. Just because I don’t want a real job, it doesn’t mean I’m stupid. I went to college and did really well. And I majored in psychology, which has proven really useful with my stepfather pay pig. But I’m just not the working type. And now I’ve found someone who will support me while asking for nothing in return.

I needed a new car, and I had no way of buying one myself. No money, no job, and also terrible credit meant that even a crappy used car was out of my reach. But no more! He was going to buy me a car. And not a used one or a reasonably priced one. A really nice one. I deserved it! But I suspected that this was going to be a bit more of a challenge than shopping trips and cell phone bills.

My sexy stepdaughter hadn’t wanted anything from me in a few days. And I missed it. I jumped every time I got a text message, hoping it would be her. I even sent her a few texts that went unanswered, even though I tried really hard not to seem needy. But I was needy. I craved her attention, and I wanted so badly to give her whatever she wanted. If only she would ask. But even though I felt that way, I balked at her next request.

After several days of no contact, she showed up in my office. She opened the door without knocking and walked right in. I was so surprised that I didn’t even think to hide the pictures of her on my computer screen or my unzipped pants.  Or most disturbing of all – my rapidly deflating cock. At least I had the minimal amount of sense required to remove my hand from it.

She looked absolutely amazing. Short skirt, low cut top and no bra. I noticed her high heels and thigh highs when she sat on the edge of my desk and crossed her legs. She didn’t seem to notice the pictures or my dick, but I zipped up and turned off my computer anyway.

It was so rare for her to visit me here that I didn’t quite know what to do except stare at her. And I had no idea what to expect. For a minute, I panicked. What if she had been there to tell me that we couldn’t do this anymore. I felt sick at that thought. But what she said absolutely floored me. And there was no way I could afford to give her what she wanted. Not this time.

Next up:  Will she get her car? What do you think?

Can’t get enough of my findom stories?  Check out Making You My Pay Pig  – A Tale of Financial Domination (Part3)