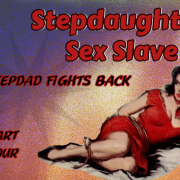 I was sure that my evil stepdad had done this before.  He had kept women as prisoners in this room before. But for how long?  And what did he do to them?  And where are they now?  I didn’t know where I was being held or if anyone would look for me.  The only thing I knew for sure was that I was this monster’s stepdaughter sex slave.

Let’s see what Stepdad is thinking

I left my stepdaughter sex slave alone in her room.  She was still chained up, which she would be 100% of the time.  I ungagged her, though.  She could scream as much as she wanted.   No one would hear her, even me.  The room was completely soundproof.

I relaxed in my office for a while to reflect on what had happened so far.  Everything had gone entirely.  I had that slut under control and ready for me to do whatever the fuck I want to her. She’s not actually ready, of course. But she isn’t able to make her own choices now.

That was ready enough for me. It’s not as if she wanted to keep her mouth wide open for what must have seemed like hours to her. Or to endure my large cock slamming into her throat over and over.  But I made sure that she had no choice.  So, what to do next?

I knew for sure that I wanted to hurt that beautiful bitch while I used her perfect body for my pleasure. I knew that her tears would make me enjoy tormenting her even more.  By then, I had sampled her tight pussy and her (forced to be) willing mouth and throat.  Her pretty little asshole would be; next, I decided.

It had always made me angry.

As expected, she was right where I had left her – still naked, bound, and shivering on the concrete floor.  I had made sure that it was warm enough in the room, but I remembered that she was one of those girls who is always cold.  Ever since she and her mother had moved in, she had turned the heat continuously up in MY house, and it had always made me angry. She couldn’t do that anymore, though.  I still can’t believe that I was almost her stepfather pay pig!”

And it was probably torturing her even more that she could see the thermostat that was out of her reach on the wall.  She seemed to be asleep, so I nudged her with my foot. She woke up looking confused and scared since she probably didn’t remember where she was or that she was my captive.  I always found that reaction amusing, and it never seemed to go away with any of the girls.

I watched her fully wake up and remember what had happened to her.  She had been very mouthy the day before, so she was wearing a ball gag since then. She couldn’t stand up all the way, but it was just enough for me to bend her over a table and secure her there. I laughed at her when she tried to squeeze her legs together and deny me access to her.

I selected a thin fiberglass cane and set about turning her perfect ass and thighs into a mess of red stripes and welts. She tried very hard to scream and get away, but of course, she could do neither.  When I was done, I removed her ball gag and asked her if she was going to try that again, and she shook her head no.

When I told her to spread her legs a second time, and then my stepdaughter sex slave complied right away.  She wasn’t crying, though, which was unusual.  I wanted her ungagged for the next part because I always enjoyed hearing the girls beg for me to stop and then ignoring them. Without a word, I started running a finger up and down her ass crack.

Then I took one lubed finger and pushed it into her very tight asshole.  Her whole body stiffened up, and she tried again to resist me.  I only had to swat her one time with the cane to make her remember the consequences and stop.

Please, I’ll do anything else you want

She finally started talking and said, “No!  Please don’t fuck me in the ass. I’ve only done it once, and it hurt so much.  Please, I’ll do anything else you want…” Naturally, I didn’t care if I hurt her.  And her begging made me even more aggressive in what I was doing to her.

She continued begging for me to stop.  And her tears finally started as I roughly pushed my thick, hard cock into her hole and started sliding in and out of her tight ass.