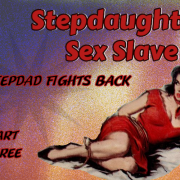 “You need to learn that there are consequences to your actions. You’ve spent most of your life being able to easily control and take advantage of men. All because you look like a supermodel. That stops now. I’m going to punish you for as long as I want. Maybe forever. And I’m going to make it as enjoyable as possible. For me, that is.”

A few things were going through my head after he stopped talking. One was the word “punishment,” and another was the word “forever.” I also couldn’t help thinking about the fact that he felt that I looked like a supermodel. I was so vain that his remark pleased me instead of frightening me even more.

By then, I could sense him standing right over me. I felt him unfasted the chain attached to my collar and remove the ball gag. But he left me blindfolded and with my arms and ankles cuffed. My monster of a stepdad then grabbed me by the metal collar and dragged me to my knees.

I heard him unzip his pants and then say, “open your mouth and take your first punishment.” And as he said that, I felt the head of his cock on my lips. I did not want it anywhere near my mouth, and I pressed my lips closed. He immediately pinched my nose shut. I held my breath as long as I could, but soon I opened it, gasping for air.

He then picked up a different gag and quickly jammed it in my mouth.  This one held my mouth wide and was open in the front.  Then he just pushed his cock right in and roughly started pushing it to the back of my throat, holding it there until I gagged. In retrospect, resisting him did not work very well.

His cock was surprisingly large

This was definitely a punishment. I always thought that he would have a small dick, but his cock was actually huge. At least 9 inches and very thick. “Maybe if I just stop fighting, it will be over quickly,” I thought. But it wasn’t. He started shoving his thick, long phallus further down my throat until I could feel his balls bounce on my chin every time he went back down.

Then I felt his hands on either side of my head, which kept my head in place, allowing him to fuck my face as hard as he wanted. “You need to learn to take this big cock because it’s going to be in your mouth a lot. You need to pay for all of those times that you teased me with the promise of your body but denied me every time.”

As he continued abusing my throat, with seemingly no concern for my comfort, he went on: “And this is for all of those times when you manipulated me into buying things for you. Only to get nothing in return but humiliation and indifference. To think that I was almost your stepfather pay pig!”

After what seemed like forever, he came, and I had no choice but to swallow it.  I was resigned to the fact that I should try to get used to the taste.  It was likely that this stepdaughter sex slave was going to be ingesting a lot of it, especially since he was extremely pissed off at me.

At the time, I had no idea that he was capable of resisting my control over him. Much less of keeping me captive for the sole purpose of punishing and raping me. Lesson learned I guess.

But I was starting to come to an even more horrible realization. He seemed very competent in the methods that he was using to keep me restrained and under his control. He was clearly very good at taking and keeping girls captive.

Also, the room where I was being kept was well prepared to keep a long-term prisoner.  He couldn’t have put all of this together so quickly, and nothing even looked new. I was sure that my evil stepdad had done this before. He had kept women as prisoners in this room before.

But for how long? And what did he do to them? And where are they now? I didn’t know where I was being held or if anyone would look for me. The only thing I knew for sure was that I was this monster’s stepdaughter sex slave.

Next up: Can you guess? If you follow my blog, you already know it’s not going to be good news.