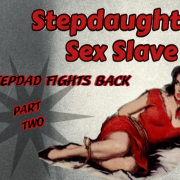 And he was looking forward to watching the process of her realizing first that she was being held captive.   Second, that her stepdad wasn’t the wimpy, pushover that she had thought.  And finally, that she was really and truly completely fucked.

It seemed like I had been passed out for a really long time.  And I seemed to be in an unfamiliar location.  That was nothing new.  I often drank too much and passed out in strange places.  But this time felt completely different.  First, I was naked.  Second I was lying on a cold bare floor.  And third, I couldn’t see or move.

My hands were cuffed behind my back, and my ankles were cuffed together.  I also could feel a heavy metal collar around my neck that was fastened to something behind me about a foot away.  My eyes were covered, and I couldn’t see.  And when I tried to call out for help, I realized that I also couldn’t speak because of a ball gag wedged into my mouth and fastened around my head.

I couldn’t help but thrash about and try to get loose and scream for help.  Rationally I knew it probably wouldn’t help, but I couldn’t stop myself.  After a few minutes of that, I was exhausted and sore from the restraints battering my naked skin.  I calmed down a bit and wondered if anyone would come looking for me.

My stepdad, though.  He would notice that I was gone and report me missing.  And he would look for me.  My stepdad adored me, and I had him completely under my control.  I was sure that he would rescue me so that he could continue to have the privilege of buying me whatever I wanted – including that Mercedes.  It was then that I heard a chair scrape on the concrete floor, followed by a man chuckling.  I was not alone in the room!

I was equally relieved but also frightened to know that someone was there with me in that cold room.  But then he started talking, and his words were terrifying. “Oh, I’m going to have so much fun with you!  You are my little whore.  I own you, and you only exist for my amusement,” he said. Even as I became even more terrified by what this dominant man was saying, I noticed that his voice sounded familiar.

No one would be looking for me.

He sounded like a more confident and less downtrodden version of my stepfather.  And as he continued talking, I  felt sick and even more panicked than before.  When he referred to me as his stepdaughter sex slave, I lost all hope.  I realized that the man who I thought was my chance of being rescued was my captor.  And even worse, he was a man who I had treated very badly.

I heard him get up from his chair, and I wondered how long he had been sitting there.  And how long he had been watching me lying naked on the floor.  And even worse, what he had done to me when I was passed out.  But I could still hear him talking to me, and I thought that it might be a good idea to listen.

He went on, “you need to learn that there are consequences to your actions. You’ve spent most of your life being able to easily control and taking advantage of men.  All because you look like a supermodel.  That stops now. I’m going to punish you for as long as I want.  Maybe forever.  And I’m going to make it as enjoyable as possible.  For me, that is…”

No idea what’s going on here?..

Check out Step father Pay Pig  – Part 3 to catch up.