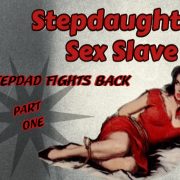 I had been sitting in my office for more than an hour after my unbelievably hot stepdaughter’s visit.  I had been struggling with the locked chastity device since then, and it was not going to come off without the key that she had around her neck.  The more I touched it, and the more I thought about being hopelessly trapped, the harder it made my cock.

The spikes inside made it uncomfortable to be even a little erect, and my cock was trying really hard to become a raging hard-on.  The spikes did not seem to be sharp, but they were placed in a circle just under the head.  They were adjustable but not without the key. At maximum length, they dug into my cock that the metal tube was already squeezing.

The result was incredibly painful.  And I had been holding an ice pack on the cage trying to get my cock to shrink a bit, but it was not working.  All I was going to get was frostbite at that point.  It was at that moment that I realized I had had enough of my sexy bitch of a stepdaughter’s sick games.

She no longer had any power over me.  And she did not control my thoughts or my cock anymore.  The pain had cleared my head.  Her plan to control me through denial had backfired completely. My first order of business was to get out of that fucking chastity device.  And for that I would need the key.

She thought she was winning.

My plan was to pretend that I was giving in and get her down into the basement.  I texted her and asked her to come back to discuss how I would add her to my AMEX account and make plans to go car shopping. I was sure that she would think that she was winning. She texted back that she would be right down.

As soon as she walked in the door, I grabbed her from behind.  She didn’t seem to even feel the needle going into her neck, and the sedative inside worked very quickly.  She collapsed in my arms, and I let her slump to the ground.  I ripped the key off of the chain around her neck and immediately unlocked the cage.

She was just lying on the floor with her legs spread open.  Of course, she was not wearing panties.  I hadn’t planned to touch her or hurt her, but I couldn’t stop myself.  Quickly I was on the floor, shoving her legs further apart, using her like a stepdaughter sex slave. I roughly pushed three fingers into her cunt that I soon followed with my throbbing cock.

Long ago, I had turned my life around and stopped the awful things I had been doing to women.  A close call with law enforcement scared me into giving it up.  But my days of being a perfectly behaved husband and stepfather were over. My bitch of a stepdaughter with her perfect body and tight pussy put my dormant dark side back in control.

I was going to lock her up here in the basement.  And she was going to be my permanent stepdaughter sex slave. I grabbed a set of keys from my desk and went to the door at the back of my office.  Fortunately, my idiot wife and her daughter had never bothered to explore the basement when they moved in.

I opened both doors of the airlocked room for the first time in almost ten years. And I was thrilled to find that it was just as I left it.  In short, I had everything I needed for my captive, stepdaughter sex slave.

No idea what’s going on here?

Check out Step father Pay Pig  – Part 1 to catch up.