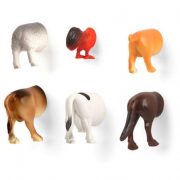 Spankable ass in wall catches my attention on my way home from work.

Spankable ass ahead: Do whatever you’d like.  The sign said as I was walking home after my night shift.  I thought at first it was a joke and was too curious not to at least have a peek.  Lo and behold, at the end of the alleyway, there was indeed a very spankable ass and legs sticking out of a wall.  It was a guy with “Only punishment will break the spell” written on the round tips of his butt.

Obviously, I wasn’t the first one to get to him, either.

I don’t know what I was starting to get so angry.

I had a tough day at work with demanding customers. Not to mention, my boss was playing hooky. In short, my patience hit its limit.  My boss wasn’t around to support me. Why was he not at work?  And here this literal lazy ass was hanging around in an alley getting fucked all day.  This mysterious ass hadn’t be abused enough in my opinion.  It didn’t know what punishment was.  Not yet anyway.  There was an old, ping-pong paddle near a dumpster that would do the trick.  I inspected its sturdiness and proceeded to walk toward the ass.  The owner must have sensed me because the ass started wiggling around nervously.

“I’ll show you a punishment,” I growl.

I threw back my arm and let his ass have it with a loud “WHAP!”  Obviously, it couldn’t scream, but I didn’t need it to in order to see that what I did hurt.  So I did it again, and again, and again.  Whap, whap, whap!  Over and over again!  His ass went from white to pink very quickly and only grew more crimson as I let my frustrations pour out with every spank.

I sighed and stuck the handle of my paddle in his asshole.

To be honest, I felt so much better.  I was whole again!  Dealing with so much shit that day, it was nice to have something to take it all out on.  The thing I wailed on was just a piece of fuck meat.  Best therapy ever! Even though such a thing was impossible, I wasn’t about to wrack my mind over it.

Did you like my little spanking story?  Call my phone sex line and let me know, you naughty boy.