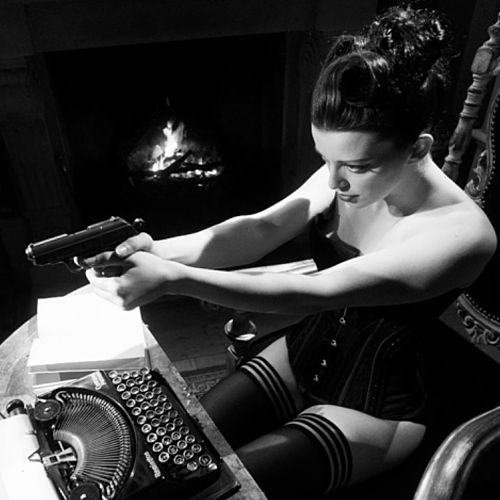 A Smoking barrel and a shot of whiskey is what will be left if he takes one step closer.

A man burst into my office with a lit cigarette in-between two fingers and a crazed look in his eye. I responded fast with my bulldog aimed right at him. His eyes told the story in an instant. Smoking the cigarette while trying to calm down I knew someone was after this man and I was going to find out who it was. As he began to catch his breath one thing was sure, this man was on the run. “Water!” He called out. For this, I had to get up. If he would have asked for whiskey I could have poured it from the desk.

Standing up and adjusting my corset he could see my curves in full, and trust me, he didn’t try to hide his noticing either. His eyes sought out salvation in my corset, but he would only find my desire to discover what I was getting myself into by his arrival. Once he began drinking his secrets spilled onto my desk. I listened to the details intently and began taking notes. The fire warmed the room keeping just enough light for our conversation to stay proper. I don’t know if it was the whiskey or his desperation for my help and my lips, but he haunted my thoughts.

I told him I never make promises I can’t keep, but I knew I could help him. This was a case of mistaken identity. A well-known crime boss saw him leaving a pub he owns after a gang robbed it. He claims my client was holding the smoking gun that killed the bartender. Unfortunately for my client, JB, The bartender is the gangster’s brother. He was in a world of hurt and landed at my doorstep. I had to do everything I could to help.

Resting on the bed I keep in the back he passes out hard, and I went to work.

beginning my shakedown for information around all the common places. There is a great source for neighborhood gossip at the old card game downtown so I started there. All the usual cock sucking gamblers were there. Freddy the fool, and Jake the snake is how I address them, and anyone else looking for information. The tips come cheap this side of the tracks, and lucky for me so do the drinks.

The blonde behind the bar had been eyeing me ever since I walked through the dingy double doors. To see what she was looking at I walked slowly over to her, making sure to glance over my shoulder from time to time. You can never be too careful at these dives. The blonde nodded at me like she had a secret of her own to share.  I slid a twenty across the bar to her hand and she leaned in close. I get off in an hour. Meet me in the shadows by the light post on the second street. I agreed and waited.