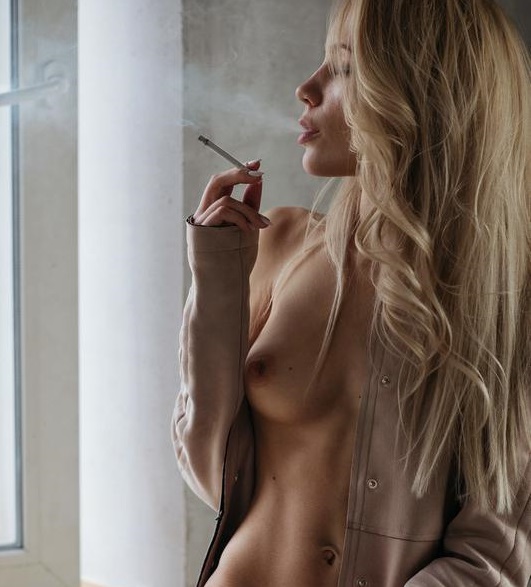 The New Guy I Am Dating Has A Smoking Fetish

I smoke weed once in a while when I’m in the mood for it, it relaxes me. Regular cigarettes not so much, they just don’t do it for me. However the new man I’ve been dating has a smoking fetish and asked if I could do it when we have sex, since it drives him crazy. I agreed to and he’s been ever hotter since I tried it for him. I got a pack of menthol’s and lit one up and got on my knees on the floor in front of him. He broke into a big smile knowing what was coming next.

I had the cigarette dangling out of the corner of my mouth while I reached up and unbuckled his belt and unzipped his jeans.  And I then took his already hard cock out and transferred the cigarette to my fingers from my mouth and gently blew a plume of smoke on it. I could see the clear drops of pre cum forming on the tip of his dick as I did.  Then  I stuck the tip of my tongue on his cock head and swirled it around, tasting him before taking another puff. I then took another drag of the cigarette and blew it on his balls. He said it ticked and he loved how it felt. I wasn’t going to give him a regular hand job.

He then got on the bed and asked me to straddle him and ride him. He said having a smoking fetish makes watching the most arousing part.  So he never wanted to have sex with the lights off, which is fine. I rode him and my tits bounced up and down. I blew smoke rings towards him and I swear I could feel his cock twitch inside of me when I did. He grabbed me by my hips and helped glide me back and forth on him. My pussy was so wet and slippery as he fucked me.

He Wanted Me To Blow Smoke In His Face

He then was breathing a lot faster and more ragged.  And he groaned loudly as he came a few seconds after I did. I could fee his squirts of cum inside of my pussy, and I loved it. After we both caught our breath I climbed off of him and cuddled against him. He thanked me for smoking while we fucked since he said he knew I didn’t normally. I said I liked pleasing, and if that did it, great. He said he’d had this smoking fetish for years and he just loved how it felt seeing a woman smoking while pleasing him. Was glad to have helped him have a better orgasm.