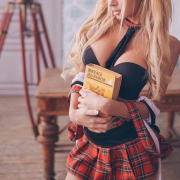 A slutty teacher’s pet just out to fuck my professor for the hell of it. Honestly, I didn’t even need a reason to do it; I just found him attractive. After all, I was just a little tease that had never been bad in school yet. However, I was ambitious, and I always wanted to do whatever it took to get to the top. My ambitions made me do so many crazy things. I spent all my school time flirting with guys I had no intention of fucking. Sometimes, I also came up with crazy little schemes to get what I wanted. But there were a lot of things along the way that helped it get even worse. For example, the first time I realized I could seduce someone into giving me something I wanted.

It started when my teacher graded my essay and gave me a B in English class. For me, that wasn’t good enough. I wanted the best. I knew that it was a little tough to raise that as quickly as I needed. There wasn’t enough time left in the school-year to crank out all the extra credit. So, it was time to see if a few old tricks could get me what I wanted!
I was going to flirt with the professor. Sure, it might backfire. Was he even into girls my age? I’d just turned 19 and wasn’t sure how well Mr. Gates had trained his self-control to be able to resist us. So I got right to it. I wore something a little skin-tight, showing off my curves that day.

I approached him after class.

It was a careful execution. I timed it and walked to meet him when all the other students left. Then, I asked if there was any way I could help my grade out. He suggested some of the usual extra credit, but I leaned in, a subtle flirty tone in my voice as I told him that I needed something more. I think he got the hint from the sly little smile that appeared on his face. I was leaning over his desk, letting him get a glimpse of my cleavage. He leaned back a little, beckoning me to come around the desk. I approached him from the side, pushing him back a little and lowering myself on my knees, still flirting with my eyes.

I always showed off for him.

And it hadn’t crossed my mind when classes started, but if I’d met him on the street, I would definitely have tried to fuck him. Life corrected itself and gave me a chance to get what I really wanted. I pulled out his cock gently and softly ran his balls through my fingers. Slowly, I traced my lips and my tongue softly all the way up along his cock, to the head. I could feel him tremble when I did that, his cock throbbing for a little more attention. I would give in to his desire, wrapping my lips around it and sucking it a little, pressing my tongue up under the head and sliding it in, little by little.

It wasn’t long before he was balls-deep in my throat, cumming as I squeezed it around his cock. He almost didn’t want me to leave or take my lips off his cock, letting out a deep, satisfied sigh as I licked up any remains and tucked him away again. “Come home with me tonight?” he begged, already having other plans for me. However, I wasn’t going to stick around just yet. I seduced him slowly. Now, he was wrapped around my finger. “You’ll have to beg me..” I whispered into his neck, pulling away with a flirty little wink and striding towards the door. I had my lacy panties hanging on to the tip of my index finger, glancing back at him briefly with a little smirk before I left the room, dropping the panties softly on the chair by the door before I left.