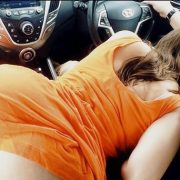 Sloppy road head makes any late-night drive down the backroads a memorable experience. Just think about it, fellas! The rush and pleasure of feeling warm hot lips wrapping around your cock. Glancing down, and seeing that naughty dream girl with her head bobbing up and down. I myself would know first hand just how fun and exciting it really is! It’s an exciting feeling knowing you are making your man swerve a little dangerously down the road.

Was it wrong? Maybe, but suddenly all I wanted was to give him the one thing he really craved. I knew if we just stopped, he would take too long getting back, and she would have his head. So I found a little loop-hole. Undoing his jeans and pulling out his semi-hard cock, while he attempted to focus on the road, I started stroking it. Getting it super hard, all 9-inches. Did I mention his girl-friend was crazy? Who wouldn’t want this dick in their mouth? His cock twitched in my hand, anticipating the sloppy road head.

Do Try To Keep Your Eyes On The Road

Now with three fingers inside my own cunt, with spit running down and collecting onto his balls, he was begging for it! He wanted it; he wanted me! It was clear now; no one had given him a good sloppy road head before because he was going crazy for it. He was thrusting up into my mouth, constantly swerving, speeding up, and slowing down. The whole trip was exhilarating!

I Would Do It Again

The whole event was an incredible turn-on; I went inside and played with myself all night long, re-imagining it again and again! Never once did I feel bad about giving a sloppy road head to my best friend’s boyfriend. In my opinion, she shouldn’t have been such a prude. But then again, I am the slut that convinced myself I was doing a gracious service.