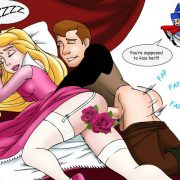 Rape impregnation sex is part of the famous Sleeping Beauty fairy tale! Well, in my twisted version anyways. And although Sleeping Beauty didn’t make it to my top sexy scifi girls post (if fairy tales are classified as scifi?), I’ve always thought there was something rather naughty about this sleeping blonde girl at the mercy of anyone who walked by.

This included the kingdom’s Prince, who thought that it’d be easy as pie to wake her from the evil fairy’s spell. As the legend goes, the good fairy put every living person and animal in the kingdom to sleep so that Sleeping Beauty wouldn’t be alone when she awoke.

What the good fairy didn’t know, however, was that many arose from their sleep much earlier than anticipated. They watched with curiosity as the kingdom’s Prince tried in vain to wake up his Princess with a passionate kiss. Yet, she did not move.

The Prince frowned. “The kiss didn’t do anything!” he exclaimed as the subjects behind him murmured with worry.

So the Prince kept trying. He stuck his tongue inside her mouth, licked her lips, and did as much kissing as he could without choking her. However, nothing woke her up.

“What am I to do? This is supposed to work!” he cried out in frustration.

A concerned subject in the back of the crowd nervously spoke up. “If I may, Your Highness, the prophecy clearly states that the Prince show Sleeping Beauty true love. Maybe a mere kiss is not enough to be considered true love…?”

“What do you mean?” asked the Prince, confused, “What else am I to do?”

“I think you should do more. Make love to her.”

A cloud of murmurs rang out in agreement amongst the subjects. They approved the idea unanimously, adding in some points of their own.

“Don’t eject your seed outside, Your Highness. A child is the truest of loves, and you must give her one.”

This suggestion came from the kingdom’s wisest and eldest counselor, and was enough to convince the Prince.

He pulled up her dress and petticoats. A finger inside her pussy told him she was still warm but needed some extra stimulation. He knelt and placed his tongue against her slit, gently spreading it inside. The sweetness of her juices made him go in further. Soon enough, he was nibbling on her clit, as his tongue went deeper inside. Sleeping Beauty’s breathing became heavier, leading to cheers from the audience.

Somewhat grinning, the Prince took off his clothes, his boner incredibly stiff from the Princess’ taste. He took one final taste of her pussy and pushed his cock in, slowly extending the entire length inside. The deeper he went, the more the subjects cheered. Finally he lost all sense of chivalry and became focused on only one thing: fucking and impregnating his Princess.

There was no doubt about it now. Rape impregnation sex would be the only thing to wake up his Sleeping Beauty.

Each thrust was calculated to bring maximum pleasure, to him and her. He removed her clothes as he moved inside her. He fed on her sumptuous and perfectly round breasts as he continued fucking her in front of everyone. The “rape impregnation sex!” chants only kept getting louder. Her slumber-filled moans, half-inviting, half-protesting, only made him bang her harder.

The Prince would try out something new almost every day. Rape impregnation sex filled his mind throughout the every week, especially exploring each and every one of Sleeping Beauty’s holes.

One night, much like the ones that had come past, the Prince had sleeping beauty hanging in the air. Her arms were tied by the subjects, and she hovered spread-eagled midair. The sight of her dripping pussy led to huge cheers from everyone.

“What happened to me?” she asked in a raspy voice.

The Prince grinned. “Only the finest rape impregnation sex around.”