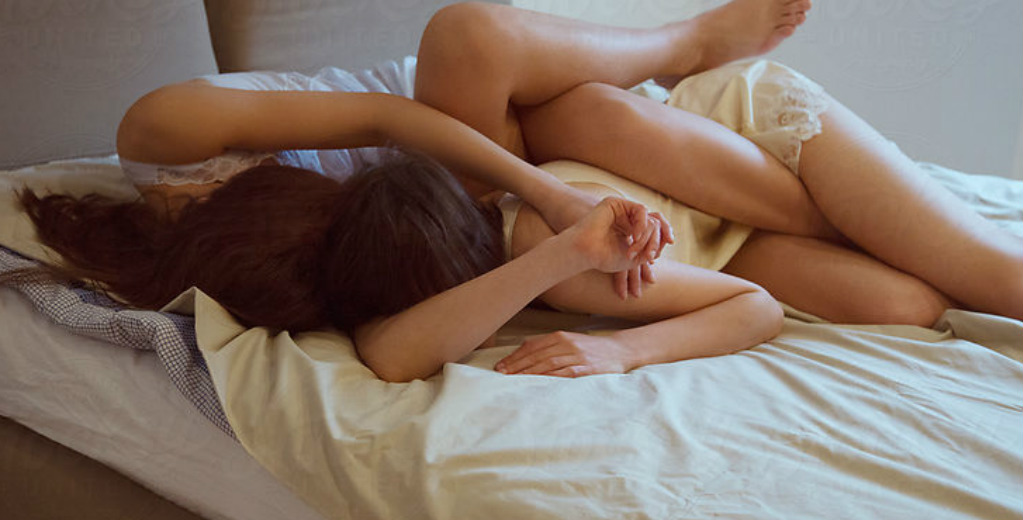 My girlfriend Tina came over one night and after a few hours of drinking vodka tonics, we agreed that she probably should not drive home that night.  My friend and fuck buddy, Ben texted me to ask what I was up to.  I told him my girlfriend Tina and I were getting ready to go to bed for the night.  He asked if he could call me on Skype to say goodnight to us.  I had no idea such a sweet and innocent request would turn into a Skype Sex Show!  And not just a Skype Sex Show, but a secret Skype Sex Show.  That’s right… he spied on us.

I answered my Skype video call and placed my laptop on my dresser.  There was Ben, smiling at us like a wolf.  “Helloooooo ladies! And may I say you are looking quite lovely tonight!” he said.  We laughed at him.

“We’re looking a bit drunk, in fact.”  I said.  I was rummaging through my drawers and found a big t-shirt that Tina could wear to bed.  I tossed it at her as Ben rambled on about the traffic ticket he got that day and how the line at Starbucks was ridiculously long and all sorts of trivial things like that.

Tina walked over to the laptop, nodding her head and acting as if she was really interested in all that Ben was talking about.  She pulled off her clothes, down to her panties and then pulled on the t-shirt I had given her.  Ben was watching her closely and had stopped talking to give her strip show his full attention.

Tina laughed and walked over to me, pulling my blouse off and unsnapping my bra.  I stepped out of my jeans and pulled a nightie on.

“And your tits, Sabrina…” Ben kissed the tips his fingers like a chef who had just tasted a delicious sauce.  “Exquisite pair of tits.”

“Well, it’s time to say goodnight to these tits.”  I said, pulling the covers of my bed.

“I’ll take you girls out for breakfast tomorrow.  Sleep well.”  he waved and I clicked off the Skype screen to find my music.  I put on some music and walked back to the bed where Tina was waiting for me.  In the back of my mind, I realized that I only minimized the Skype screen but I didn’t sign off. Oh, well.

She is an expert pussy eater and I immediately clenched my fists and bit my lower lip as she plunged her tongue inside my cunt hole and licked up and down my lips and clit.  She swung her body around, climbing on top of me so that we were now in 69 position.

I slid a finger in her asshole as I ate her pussy, trying hard to duplicate her superb tonguing skills.  She moaned as I licked her pussy and slowly fingered her tight asshole and her warm breath on my pussy added to the pleasure.

“You were spying on us, you pervert!”  I said, not really angry at all.  Tina burst out laughing.

“When a unique opportunity arises, you have to take it, Sabrina.  How many times have I said this?” he said.

“You’d  better make it a very good breakfast tomorrow, you peeping Tom.”  I said as I signed out of Skype.  I jumped back into bed and Tina’s warm body.

It was really too bad for Ben that he revealed himself.  He could have seen a much dirtier sex show that night if he had just kept quiet!