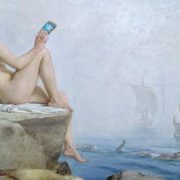 It was mid-summer in Maine a beautiful clear, starlight night. The moon was full and bright, The ocean was so dark it looked like endless black glass. The only thing lighting the night was the reflection in the sea. What a beautiful night for a walk on the beach to clear your mind. That is exactly what Gregory thought as his toes squished into the sand. The air cool around his bare shoulders, the sand still warm from the suns rays. Suddenly there was a sound. Like a ringing in his ears that adjusted to the sound of a song… It was calling him to the ocean.

Gregory was about waist deep in the water, but in New England, it is never really warm always colder than you think. Just beyond the beach is a mini island made of sand and mossy grasses. The song was getting louder! As Gregory approached the island. It was as if the song was pulling him forward and he could not see or hear anything else. Before his very eyes, he saw a mermaid make her transformation from fin form to beautiful slender legs. The Siren was the picture of perfect beauty.

Her hair was Long and wavey in that way your hair gets when you spent the day at the beach. Her brown locks flowing past her shoulders. So Her tits were perfect and perky her nipples up and coming to a point. A Slender body any guy would want to fuck. The only thing covered was her pussy. The Siren’s pussy was covered by a seashell, still, she sang and called to him. Finally reaching the beautiful woman whose magical voice called to him. She grabbed him in a strong embrace. Mermaids are stronger than us humans and her arms held him tight as she touched his muscled arms.

Gregory laid her back in the grassy sand. Making love to her in the light of the moon. He removed the shell to find the prettiest pussy he has ever seen. Sliding his cock inside of her… He fucked her until he came inside of her. You see she was just looking for a mate. Now that they consummated it was time for him to go… So With a blur of speed, she ripped him apart. Tearing at him with her teeth… devouring him.

If you love strange and Taboo Phone Sex you should also check out my sexy teacher story! Call me lets have some fun together!