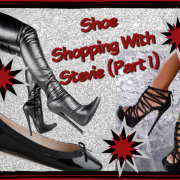 This story is based on a fantasy that I concocted, along with my awesome client – let’s call him Dennis.  I told him that I thought our fantasy would make a great blog post and he agreed.

I had spent most of the day shopping at the mall with my best friend Kassidy.  We’ve been friends since college and have had so many fun, sexy times. We’ve had threesomes with hot guys and gone to sex parties together.  She is pretty much my opposite, physically. She has long blonde hair, green eyes, and the cutest freckles. She’s very slim with perfect small breasts, perpetually hard nipples and an amazing ass.

Little did I know that my phone sex client, Dennis was also shopping at Nordstrom today!  Dennis is the nicest guy ever and he has a huge shoe fetish. And what I also didn’t know was that he knew exactly who I was as soon as he saw me.  When he saw Kassidy and me head toward the shoe department, he had an idea. It was a slow weekday at the store. And he bribed the lone sales clerk on duty that day to take a long lunch break. He knew he was on his way to making his own shoe fetish porn!

When we walked into the shoe department, I was so excited.   Dennis was walking out of the stockroom and pinning on a name tag that said “Bob” when I saw him.  He asked if he could help us and we each pointed out several pairs of shoes that we wanted to try on. We both wore size 7 1/2 so it should be pretty easy to help us try on a lot of pairs of shoes.

“Bob” was gone a very long time and when he came out, he brought out totally different pairs than we asked for.  Kassidy and I were very confused but they were cute and sexy –  so we decided to try them on anyway. We usually try them on by ourselves.  It’s faster than having the clerk go through the whole ceremony of putting them on our feet like Cinderella. “Bob” looked oddly disappointed when we told him this.  Sales clerks are usually happy to get out of doing that.

None of the pairs were quite right…

We tried on all of the pairs of shoes that “Bob” brought out but none of them were quite right.  So we sent him to the back with several requests each. While he was gone, I told Kassidy that I felt like I knew the clerk.   We also talked about what a terrible salesperson he was.  Suddenly, I realized that I knew exactly who he was! He was my client Dennis – the one with the shoe fetish. He had told me his profession before and he was definitely not a shoe salesman or anything related to that.

We made sure he got a nice look!

His face started turning red when I did that. When he tried the first pair on Kassidy, she made sure he got a nice, long look at her thong panties.  His face got even redder. He seemed to need a moment to compose himself and rushed off to the back room.

Next up:  Will our fake sales clerk ever come out of the stock room?  I hope so!

And, is shoe shopping not your thing?  Well, do you have a small penis or wish that you did?  If so, you’ll love my last series about small penis humiliation!