Sexy Story ; A Crazy Place To Have The Kinkiest Sex 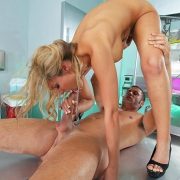 A Sexy Story In The Strangest Place

I have a part-time job in a morgue if you can believe it. It’s been busier the last few months of course, but still fairly quiet. Especially during the night shift I work. I always worried that I’d be caught masturbating. There’s usually only one other person there and we get along great. We flirt a lot. I never dreamed I’d be flirting in a morgue, or doing any of the other things I’ve been doing, either. Have a sense of humor to work in this kind of place, and we both do. One night it was really dead, pun intended, and we knew no more “deliveries” would arrive, but we were bored. We decided to go into one of the empty rooms and fool around a bit.

We Decided To To Play Doctor

So, We put on gloves and decided to “play doctor”. It turned into a kind of weird and sexy story. I asked him if he’d ever had a prostate exam and he said no. I told him to lean over the table and pull down his pants. And I went in with the gloves and milked his prostate. He came like a train. My previous boyfriend had taught me how to do it. He said it was the most intense orgasm a man could have. I did it for him often. We this guy nearly fainted with pleasure when I gave him one this way. I didn’t even need to touch his dick, and he squirted an incredible amount.

Lying On The Table Getting An Internal

He then said he wanted to give me an exam. He put on some gloves and had me get up on the table. I tried not to think about what had happened on that table a few hours ago. He had me put my feet down and my knees up and said he wanted to examine my pussy. I relaxed and let him do so. I felt him spread open my pussy lips and then lay his tongue between them. He exposed my clit and was just dancing that tongue over my stiff clit making me squirm. I made his face all wet and he loved it. He just made me drip.

My Moans Echoed Throughout the Room

A sexy story rarely takes place in a location like this, but with creativity, anything is possible. I gripped the chilly edge of the stainless steel table as he brought me to orgasm with his tongue on my clit. There was no one to hear us, so I was as loud as I wanted to be. In the tiled room, there was quite an echo of my orgasmic noises. Almost enough to wake the dead, one might say, but not quite! He then got on to the table with me and we fucked right there. Perhaps not the most comfortable place to go at it, but there were no made up soft beds. So the autopsy table would have to do.

This Was Really Freaky

His cock was thick and filled me well. He thrust just right so it rubbed against my clit with every pump into me. I loved it. I wrapped my arms and legs around him tightly as we fucked. That squishy sound as his cock dove deeply into my wet cunt, and our moans. Our sounds echoed throughout the room and we kissed and fucked. It was kind of freaky to be doing this here. We had total privacy and a lot of time, and were horny, so why not? We both had high sex drives and had minimal work to do, so the opportunity was there for the taking.

Where Is  The Strangest Place That You’ve Had Sex?

No one would ever find out, and the nights were so quiet. We fooled around many times like this. I would keep this secret, sexy story to myself. Others might find it creepy, but it worked for us. One night I had my coworker get on the table and I gave him a sloppy blow job. I stripped him naked, laying on the table and I was bending over him, stroking his cock up and down. I lowered my mouth over his shaft and drooled all over it.  And I worked my mouth over his throbbing shaft like a vacuum cleaner. I drained him dry of every drop of his cum. I swallowed every drop. We kept it to ourselves. Our romantic nights in the morgue wouldn’t really have many people understanding.

Join me for some hot phone sex! There is nothing too Kinky for me!