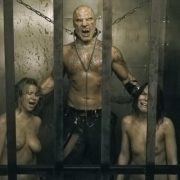 However, before you get all judgemental on me, remember the saying, ‘Don’t knock it till you try it!’, because the very thing you think might be too kinky for you may turn out to be just the thing you need to break out of your box! Trust me. I know.

So, the first day I arrived on the set it was total creeperville. But, I parked where I’d been told to and approached the only standing structure around. I entered the barn and observed all the shit you’d expect to see in a haunted locale. Chains hanging from rafters, what looked like the blood of previous victims splashing the hay bails. You know, horror shit! lol.

As I ran my fingers along the tinkling chains, I felt a shove from behind. I fell forward and erroneously thought that the backward “tug” I got was to help keep me from falling. Oh, how wrong I was! That “tug” was a yank to my hair pulling me back upright just in time to feel the cold steel of a knife against my tits which were then exposed by the yank backward. My buttons soared across the barn floor like chiclets spraying from a dispenser! I was now considering myself kidnapped!

Both of my hands flew back to my ponytail but that did little good as I then, saw the nastiest fucker I’d ever imagined seeing. You know, nails caked with what looked like YEARS of filth and GOD knows what else. I fought the urge to vomit in my own mouth. But, then it got worse. He whispered his funky breath against my cheek and I nearly fainted from the stench. “You want this fat dick, little girl?” Um… NO, I thought to myself. My mind reeled with what was happening and how the hell I would get myself out of this. However, what I didn’t even guess that the comfort of my smooth sheets was getting further away from me by the second.

What I had no idea about was that my bed would miss me for a good long time. Next came the punch to the back of my head that finally landed me on that filthy barn floor! And that’s the first time I SAW him, it…him. He looked like the epitome of a wild inbred horror movie villain and I just prayed this was more od an audition than anything else. I would have no such luck!

You know, when agreeing to the audition, it never occurred to me that I might not make it home. That I might become a real-life sex slave to inbred freaks. Remember me snatching up that big PRE-audition check? Good thing I cashed it right away. Next, another ‘man’ limped in on one leg which was shorter than the other. Another sign of inbreeding, I just knew from the looks of him. And his scent? Oh, so much worse than the man still groping my now bared tits.

The second animal lurched forward and slobbered all over my tits while making guttural noises of pleasure. His yellow teeth grazed and nipped at my breasts and I let out a cry. That just seemed to stoke their fires of lust. A filthy dick slammed up my asshole and I pass out. I woke to a gang-bang style rape involving both additional men and a few women. I could hear the sound of a video recorder running, but the people were savages and enjoying every second of my torture.

My face yanked upward and I was ordered to moan with pleasure and urging me to beg for more! So, I did as instructed and BOY DID I MOAN! I thrust my asshole down his dirty dick and begged for more. The other brother was so excited that he drooled all down my tits and then he shoved his sour tongue into my mouth. If I was going to be force fucked on camera, I was gonna win a fucking Oscar for my performance.

That really got them going. One had his dick in me as the other one tongued my wet pussy. Why was I wet? Cuz, I was getting PAID to and I wanted more than ANYTHING to LIVE! And, well… If I’m being honest, it really didn’t feel bad. I pretended that they were clean, sexy and hot for me. Well, that last part was already true. They were hot for me. So, there’s that! Of course, they had clearly NEVER had a woman pant, moan, and thrust for them. Small wonder there.

I begged for more and I had no idea what that would mean, but I was about to find out. I had no idea that I wasn’t the ONLY one on this farm until I was dragged kicking and screaming out to the back of the barn. There I got a better scope of what was to happen to me. Unless I was smarter than the average chick and I WAS! Acting was about to become EVERYTHING to me! It had to be if I wanted to survive.