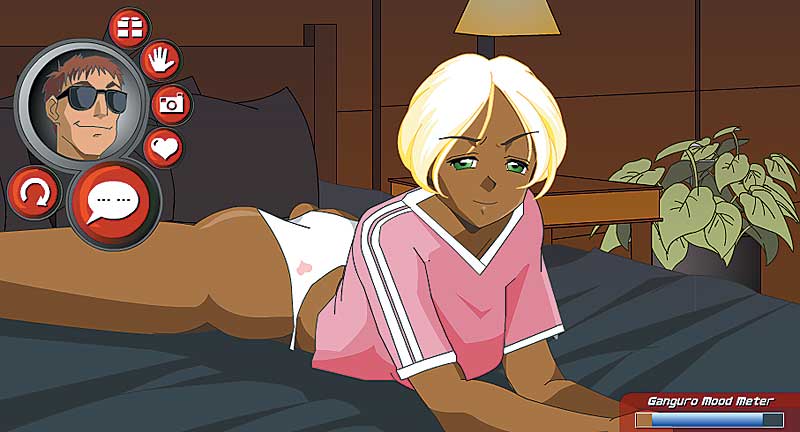 Growing up as an internet child, I always had the freedom to find sex games.

Most of the sex games I played in were flash games, easy to find on the internet.  For example, they were things I’d find on Newgrounds, or 2 Free Flash Games. But my first flash sex game was a partial flash game, Ganguro Girl. A young me found it was a dating sim, not that I knew what those were at the time. Basically, a dating sim is where you play as the main character, and try to date the girls (who happen to be Ganguro, or tanned Japanese women).

It seemed easy enough. I took my love interest, Saori, and gave her gifts. I talked to her at the club. Whenever she was free, we went on dates. In this fantasy world, I was strong (one of three characteristics I could have) and thus did illegal things that often landed me in jail, so that I could buy Saori purses, CDs, and boots. Any problems she had were easily solved with hair dye, makeup, or tanning oil. The world was far, far simpler with Saori.

And oh, the animated sex, while terrible, really got me going as I watched my character finally get what he wanted with Saori. From this point on, I wanted to play nothing but these kinds of games: sex games.

But what got me more than anything were her moans. As I watched Saori get pounded again and again, her digitally repeated moans got my young pussy wet. I squirmed in my seat listening to her. I even got a tape recorder from my parents’ closet and recorded her voice for 15 minutes, never orgasming in that fantasy. Instead, I’d play it over and over again as I listened through my headphones, my pussy getting wetter as I touched myself.

That’s what made the game for me.

Nostalgia Wetness Rating: Even the Music Gives my Pussy a Pavlovian Response

Nostalgia Orgasms: Time to Listen to Those Moans on Repeat

Did you ever play this sex game? Know any other sex games for the phone you’d like to share?