Sex For Weed: College Girl Has To Pay Somehow 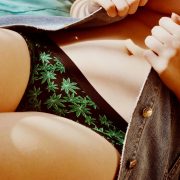 Sex for weed is one of the old standards. Every drug dealer has jokingly brought up this offer to the sexiest girls he knows, and every girl has considered it at some point. Paying with sex is nothing new to me, either. I partied a little too hard in college. Still do, honestly! I love to have a little fun. But, sometimes, all that fun can cost a pretty penny. The costs add up quickly, especially when all the parties have been 420-friendly. To make matters worse, I like sneaking upstairs with the stoners and having a little fun. Usually, a night cozied up flirting with them and getting high ends up being free, but I like to chip in a little. Sometimes it’s just better to get my own party favors before I go home for the night.

Except, there’s a few times when I don’t have any cash on me that I can use. I always get what I want.  Sometimes, asking nicely doesn’t work so I have to improvise a little. How could I convince this all-business, no-bullshit dealer to let me take a little for free? Well, I couldn’t just walk up to him and ask him for it, he’d already said no. I couldn’t just kiss him a little, put on a pretty little pout and hope he’d just hand it over. If anything was going to work on him, it was seduction.

I couldn’t let him know what I wanted.

At least, I couldn’t give up the act until it was done and he was riding that post-sex haze. Otherwise, he’d just turn me away. So, I started slow. I was just giving him a little smile every now and then as we were lighting up, laughing at his jokes, and every now and then, giving him the “fuck me” eyes. Sure, some guys would completely miss the hint, but I knew he wouldn’t. He was a confident guy and he’d been flirting with me before. After all, he had a masculine kind of dominant vibe about him, so I knew he’d catch on if I started flirting back.

After a little while, I switched spots, sitting next to him and leaning a little against him as we were passing stuff around. One time when I got to take a hit, I breathed in really deep for a second, holding it long enough so I could reach up to kiss him, having him take some of it from me as he kissed back. I always loved shotgun kisses and I knew he would love my lips against his. The little bit of pink gloss on my lips stayed on him, and he even smiled when he tasted the hint of strawberry on his lips. The thought of fucking him and paying sex for weed was honestly kind of turning me on.

Then we passed the blunt away from us.

And as everyone else was distracted, I slid my hand under his shirt. I went just far enough to tease him a little. I played with the edge of his basketball shorts. The more that I teased his cock, the more I could feel him getting harder. He was massive. There was no way I could manage to take it all, but feeling how big he was had turned me into a greedy little slut. As time went on, it wasn’t long before he had to get up, pulling me out of the room and into the hallway. All my seduction was definitely working, he had finally lost his patience.

The man could barely keep his hands off of me, pulling me into the other room and throwing me on the bed. He climbed on top almost instantly. There was no hesitation when he started pulling off every bit of my clothes. The fucking I got was unreal, dominant, and fast. There was nothing ‘beta’ about this man, but maybe it was because he was black. After all, I always had the same time when it came to guys that I wanted to fuck. This one just happened to have a little treat for me right after. He gave me what I wanted that night. I just wanted a good fuck, and sex for weed. Don’t you wish you could have gotten to play with me then?

I used to be even naughtier in high school. I would have done anything for a good, long party night. But I bet that little bit of ageplay phone sex might just turn you on too much!