Paying With Sex: Fucking The Taxi Driver For The Fare 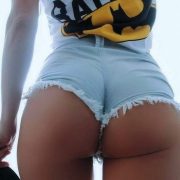 And eventually, I wanted to challenge her right back..and that’s when I found a cute taxi driver. I seldom take a taxi. I always drive or walk, and I think I’ve only taken the taxi three times in my life.. Once with my parents at the airport, and the second time going to the airport again. And the third time’s the charm. 😉 My parents went out of town, driving down to Miami. I had my brand new car sitting in the driveway..but no license just yet. I’d just turned 18 and graduated, and I really wanted to get my tongue pierced. So I snuck out and called a taxi. Nobody I knew was in town at the moment, so it was my last resort.

Little did I know, my taxi driver would be a guy barely in his 20’s, and he was cute.

I told him where I wanted to go and asked if he could wait a little while – it wouldn’t be long! So he agreed, and he dropped me off at the tattoo parlor and waited outside. I came back out with a brand new, metal tongue ring and I was extremely excited. I sneaked out and got a piercing. It was all a thrill and I love being bad, so that had my adrenaline pumping. And then, realizing I had a brand new piece of jewelry that was very sexual in nature. I started flirting with him. Fuck, he was really cute, why shouldn’t I flirt with the taxi driver?

He was curious about what I’d had done, so I shot him a  little smile and held my tongue out. He cracked a little smirk and leaned in over the seat. Then, he asked if I knew what those were for. Of course, rather than give him a straight-up answer, I just replied, “maybe I can show you better than I can explain it.” I’d already given him the card to run for the round-trip back home, but now I had a better idea in mind. Sure, maybe he had to meet his quota with cash. But he was so cute that I might do something extra. For his tip, I was paying with sex.

He knew exactly what I was thinking.

He flashed another wicked smile and turned the car off, getting out so he could climb in the backseat with me. The thought of being his little slut and paying with sex turned me on so much. My pussy was dripping wet just from the idea. I still remember running my fingers through his hair as I got to play with my tongue ring for the first time. Yeah, it hurt, and I probably shouldn’t have been putting it to work so soon.. But, hell, why not? If I was gonna be bad. I was going to go all the way. He already knew that I was going to be paying with sex for how sweet he was, and how he waited around outside for me.