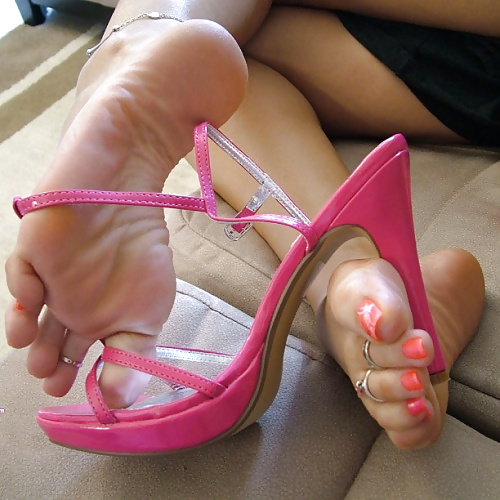 The principal invited me into his office and I immediately noticed him looking down at my feet. I knew my plan would work. However, glass windows covered on side of his office. And there wasn’t much privacy with office ladies walking by all the time. This would be tricky but extra sexy.

He told me all the reasons my daughter should be suspended. But, I just noticed how good-looking he was. I was going to enjoy this! So, I slipped both feet out of my sandals. He continued talking as I started to run my foot up his calf. He hesitated for a second but then continued on. Then I scooted my chair as close as possible to his desk to get ready for my secret sexy footjob. That’s when I ran both feet up his inner thighs and finally reached his crotch. Blushing, he asked what I was doing. I just said, “What do you think I’m doing?” and proceeded to his stiff cock.

My Pretty Feet Jerk Him

Massaging his stiff rod, I realized he had a panty dropper dick! He was huge and thick. He stopped talking by this point and moaned quietly. Suddenly, his secretary opened the door. She let him know his next appointment was canceled. He froze in fear as she poked her head into the office. But I didn’t care, I kept massaging that thick cock. When she left I told him how lucky we were to have some extra time. He tried to say that this was inappropriate and we should stop. But, I just kept on with my secret sexy footjob, running my pretty feet up and down his shaft.