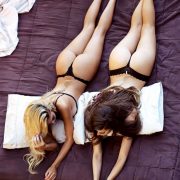 My closet domme would lend me no mercy.

She gripped my hair tightly and pulled my head back. My hands dropped off of the toy at the impact of another thwack!  I almost dropped the toy and bit down with my teeth to keep it in. Kathy giggled at my desperate attempt. I would never have guessed that she was a secret domme, but I was now piecing things together.

Love sex toys? Find out about my first experience!

Lifting her ass and arching her back, Kathy angled herself better for her benefit.  It was a better angle for my mouth, too.   Using less grip, I plunged in a few more inches before pulling it out and shoving it back in slowly.

Feel like you are missing something? Learn more about our closet domme here.

Her legs locked around my head, forcing my face farther and deeper into her cunt. I knew that she would burst at any minute now, and I was happy to be part of it.  Rocking violently against the cock in my mouth, the closet domme begins shivering in anticipation.  It is entirely possible I was, too.  Waiting for the earth-shattering moans and spasms, I was shocked when I was met with warm salty water in my face instead.  Kathy was a squirter.  Something that I did not know that made me feel closer to her than ever before.

Later, we went to the bedroom and laid on the bed, talking about the experience.  I wanted to know why she had never told me before that she was so dominant.  It turned out that her closet domme tendencies were new to her as well.  Before we began our porn-a-thon, she never even considered how she may act in the bedroom. I wondered if this was a one-time thing or if it would happen more now that we both had played. I wanted to ask, but it was something that I could not bring myself to vocalize.