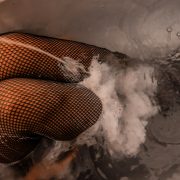 In my first year of college, I had a roommate named Kathy whom I did college experimentation with. We shared a one-bedroom that was cheap and close enough to walk to campus.  Major bonus points because parking was a bitch.

Early one year, it seemed like the snow would never stop falling.  Before the first fallen snow had a chance to melt, a new storm would happen, as you can guess, that makes bar crawling a huge pain… and impossible in heels.  So, we took to staying home more.  We did get bored easily, though.  We had been watching a lot of porn for “research.”  College sex games were what we kept reaching for.  It was so close to the realm of possibilities that it was hot. Of course, we had never heard anyone else on campus discussing naughty rendezvous, so we were unsure how to bridge that conversation of college experimentation ourselves.

This constant snow did give us much time to imagine, and before either of us realized what we were going to do, I found myself asking Kathy if she wanted to experiment with our own college sex games.

I went online and looked into the adult stores.  Kathy and I both agreed, we needed one outfit and one toy each.  The more ridiculous, the more fun the sex games would be.  My decisions felt easier than they should have.

When my box arrived in the mail, I was glowing with excitement.  That inbox notification that “your package has been delivered” sent a shiver down my spine as I grabbed my grey yoga pants and pulled them on.  I went down the apartment stairs two at a time, retrieved my belongings from the main hall, and sprinted back up. Then I dove into the box, tearing apart the flaps like a madwoman.  I pulled out my outfit for the night, smiled at my naughtiness inwardly, and went to the bathroom to try it on.

Ever think about college sex games yourself?

Kathy worked a later shift than usual, so she would be wearing her outfit under her uniform.  The thought of her slowly undressing in front of me made my nipples poke out at attention through the fishnet bralette I slid on.  I glanced at myself in the mirror. I felt hot.  Not pretty, like I feel in thigh highs and knee-length skirts. Rather, I felt like a badass that oozed sex appeal.

I knew one of the promises I had made was that we could not touch ourselves until the night had come.  Yet, feeling turned on by how my body pulled at the fishnets, I could not help but give myself a little warm-up run.  I figured Kathy wouldn’t know I cheated in our college experimentation, and I wouldn’t be trying to edge myself on the corner of the couch until she came home.

“I slid my finger through the net and onto my dripping pussy.”

On the edge of the tub, I slid my finger through the net and onto my dripping pussy.  I was likely to make a mess of these, but I had faith it would dry up before she finished her shift.  I grabbed a bottle of unscented lotion, poured it onto my fingers, and started gently rubbing myself. The fishnets turned milky white at contact.

Laying back on the tub, I teased my entrance with smooth fingers. I pulled at my pussy lips and tugged them through the holes, twisting and kneading my sensitive skin.  This had to be it; I knew I HAD to bring myself to orgasm.  If I did it quickly, there would be plenty of time for it to dry, and I would be in luck.  After all, a broken promise was only an issue if I was caught. These college sex games had me wild!

I settled for clitoral stimulation, just a warm-up.  My fingers were already covered in my sticky juices, and I felt I was at my peak timing.  A quickie would suffice! I rocked my pussy back and forth against my hand, feeling that familiar urge in my tummy.  Soon after, I creamed myself.  Sticky strings stuck to my fingers, and a feeling of euphoria hit. That satisfying feeling was short-lived, as I heard the front door creak open, and my stomach drop.