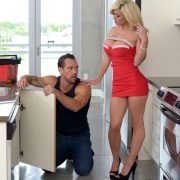 2 years ago
Cheating Wife,MILF,Role Play Phone Sex
Role Play Fantasy: Have you ever been so bored in a relationship that you need something to spice it up? Roleplay phone sex does it for me. I know that when I am on the phone, I can be anyone my little heart desires. After watching XXX-rated porn about a delivery man, I got this wonderful sexual idea. What about the hot plumber who cleans the pipes? I made sure this would be more than some role play fantasy. This was really to happen to me, and tonight.
After the kitchen sink got clogged, I called the plumber to come and fix it for me. I even said I would pay extra for a night call. Yes, I needed and wanted it that bad.  Is this why some men become plumbers? It can’t be for the ass crack. I was hoping the one I got wasn’t some old fat man who smelled like moldy cheese. After researching the company online, and you can request certain men. Who knew?

This Role Play Fantasy was quickly becoming a reality for me.

After browsing the internet I found Jeff on a website and told the dispatcher I wanted him because he was recommended by a friend.  Little did I know it was her husband.  When the ass crack stud showed up at my house, I made sure to barely have anything on. My robe was sheer, and so short my ass hung out. I had his attention the moment I opened the door and invited him inside. The moment I saw the outline of his cock I knew I would be fucking him before he left.
Seduction isn’t that hard when a man is horny. He gladly took the beer I offered him. I sat on the counter bouncing my high heel from my foot, and his eyes watched with delight. I knew I had lured him in when he took off his shirt because it was too hot. My house was cool at 60 degrees but I wasn’t going to argue. Each time he looked up, his eyes were on the slit of my robe. What he didn’t know was that I kept loosening the belt.

This role play fantasy was getting so hot.