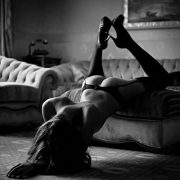 As we talked, more, we came upon the idea of sex. She revealed that she was, in fact, a virgin. With this, she explained a bunch of other sex revelations. She revealed that she loved the idea of experiencing salad-tossing. I was shocked and impressed. She also told me that she was excited by the idea of having a threesome. My friend immediately passed through my mind because she had seen him and passing and said to me that she thought he was cute. I felt that it was perfect. We were going to take her virginity and assure that she came over and over. I invited both of them over and gave my guy friend a run-down for the plan. We were going to give her the best first-time ever!

Just the perfect level of cozy. Her eyes glazed over, and she became all giggly and relaxed. Her shyness dissipated. We all laid down on my bed and talked until there was a lull in the conversation. She was sandwiched right between us. I faced her, and he spooned her.  I laced my fingers in her hair and gently gripped the back of her head. Then I held her eyes and pulled her mouth into mine. My friend reached around her and slid his hand up the front of her shirt. Then I helped him undress her. We hurriedly pulled off our own clothes. She seemed quite excited. I reached down and rubbed her clit while my friend slid a finger in, and then two.

He worked them in long, slow strokes while I rubbed her clit. Once she came all over his fingers, she thought we were finished. Haha, that was only the beginning! My friend and I switched places. He licked her clit and fingered her pussy while I ate her ass. I spiraled my tongue inwards towards the opening and slid my tongue into her. I twisted it as I worked it in until it was fully inside of her. Then I sucked the rim. I felt my friend’s fingers sliding in and out of her pussy. She squirted and came all over both of us. Then, we decided it was time to pop that cherry of hers. I laid back on the bed, and she knelt above me. She kissed me as I rubbed her clit.

My friend began slowly working his cock inside of her.

I felt her breathing grow shallower as he filled her with his cock. Then, my friend began working his thumb into her asshole and wriggling it around. He pumped in her in long, slow strokes while pumping his thumb as well. I rubbed her clit a little bit faster and a little bit harder. My friend began pumping with more enthusiasm. She damn sure looked like she was about to cum. I watched her big eyes roll back, and her eyelashes flutter closed. With my free hand, I grabbed both of her arms and held them in place above both of our heads. Then I kissed her deeply while she erupted in shivers. Her legs are clenching, and her torso was quivering.