Religious sex with a student and a sinning priest.* 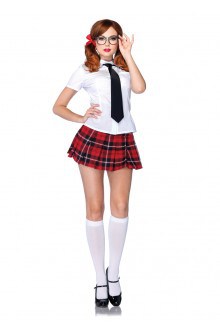 Religious sex with a student and a sinning priest. Because I was called to the office, Our principal is the head priest of the Catholic church in my town. He was older most people feared him more than respected him. So I never feared him till I saw what he was capable of. Also, I was being called to the office because I spoke out of turn and against the church getting me a ruler in the hands by a nun and a trip to see the principal. I was waiting in the lobby of his overly exuberant office, and I sat and waited.

“Kylie” my name was called by a stern deep voice filled with disappointment. I stood up from my seat and entered the office. I Walked into his office in my schoolgirl outfit. Plaid skirt, knee-high white stockings, and a white button-up blouse. So I entered the room immediately wishing I was not there. The principal starts pacing in front of me with his hands laced together behind his back.

He is wearing black pants and a black shirt with the white collar. So He started to scold me and told me he has every mind to expel me from the school, Immediately I begin to panic. I begin to notice as he paced back and forth his cock began to grow hard under his black slacks.

The priest stopped right in front of me fully erect “I am a religious man” He started “but I believe in giving second chances to young girls who deserve them.” As a matter of fact, I could hear my stranger danger alarms going off in my head as he said it. He circled behind me pressing his hands on my shoulders and squeezed hard. “So you know I could expel you or you could take your punishment now” his voice was so sinister.

Scared to be expelled I complied to his request. “Bend over the table” he commanded. Bending over his desk I could feel him lift my skirt with a cold metal ruler, I could feel the cold air against my bare ass. He stood behind me pressed his cock against my ass and whispered in my ear “be a good girl” as he pushed my thong panties to the side as he slid his cock inside me.