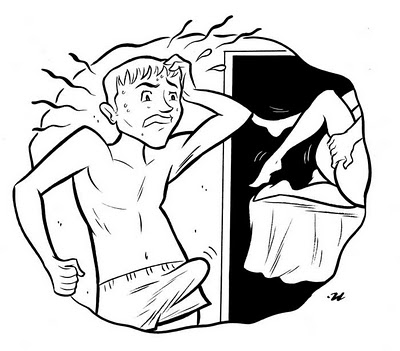 Is there anything more humiliating for a man than seeing his girlfriend fuck another guy while he watches? If there is then let me know so I can try it with my boyfriend. Last night my boyfriend pissed me off; we went out to dinner with a few friends and I caught him flirting with the waitress. I had to re-assert my dominance and remind him that he’s damn lucky to be with me and there are lots of guys who can take his place. That led us to tonight and my boyfriend answered the door to find Andrew standing there.

I went over to Andrew and told my boyfriend that after his little flirtation I didn’t think he was good enough to sleep with tonight. Instead, he would sit in a chair and watch while Andrew fucked me. My boyfriend didn’t look too happy but he knew better than to say anything.

We went upstairs and my boyfriend sat down. He watched while I did a slow striptease and then helped Andrew get undressed. I moved Andrew so I could see my boyfriend and then knelt in front of him. I put one hand on his hip and held his dick with my other hand. Then I made eye contact with my boyfriend as I slowly licked up his length. My boyfriend couldn’t take his eyes off me and put his hand on his lap. I knew he was dying to jerk off. I took Andrew inside my mouth and sucked him slow and hard. So I slid a hand down and pushed a finger inside my pussy.

I stroked myself as I bobbed up and down on Andrew’s dick. When I couldn’t wait any longer I stopped and stood up. I led Andrew to the bed and straddled him. I slowly lowered myself on his dick. So I let out a deep moan and said “Oh, you’re so much bigger than my boyfriend.” I started to ride him slowly. I got into a rhythm and snuck a look at my boyfriend. He was staring at us and rubbing himself through his pants.  I moved faster, balancing myself by putting my hands on Andrew’s stomach. He groaned as I moved up and down him. I felt his stomach muscles tense under my fingers and he started to cum. I kept riding him until I came. Then I let out a loud cry and slowed down.

When my orgasm passed I stayed on Andrew, feeling him soften inside me. I climbed off him and said, “It’s been a while since I had such a good fuck.”

One Reply to “Re-asserting My Dominance ♕”