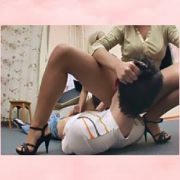 At first thought, you’d think that it’s impossible to have a collection of rape fetish stories but I digress.

I have personally raped a couple of men my self and have watched this pleasureful experience happen first hand. I can be a sadistic little lady you know. Just look into my glare and feel how my gaze makes you freeze. Now stop twitching in your seat, my dear. I’m getting to one of my favorites of rape fetish stories. Get your pants down and cock in hand. Just face it, babe. You love the perverse nature of a hot woman.

He thought he had life figured out.

His name was Chuck. He was a 22-year-old hot college student. Chiseled body, 6 foot tall, wavy brown hair and deep ocean blue eyes. He was also a virgin! Raise in the midwest in a strict home he made sure to abide by the rules of his church-going parents. He stuck to every curfew, kept his grades up and did all of his chores. He was such a good child that when his day came to go to college they didn’t hold him back from his top pick. With the window of opportunity opened he chose to go to NYU!

He made it to his sinner year there without a drop of alcohol, he sustained from sex and most importantly: didn’t break his curfew. One day while walking across campus a pale skinned beauty stopped him in his tracks. She reminded him of the girls back home. Long silky red hair, piercing green eyes, freckles scattered lightly across her face, to add a slender frame sent from heaven. Chuck managed to say hello to the firey haired beauty which sparked a short convo between him and Macey consisting of him finally asking a girl out. He thought what the heck. I’m graduating soon so it’s time to find a wife.

As he got dress and thought of holding hands he didn’t think that he’d be added to Macey’s list of rape fetish stories.

They ate dinner and strolled down the sidewalk that night without a care in the world. They even stopped for ice cream which Macey paid for while Chuke sat on the bench waiting for her return in the warm August air. She’d brought him back a chocolate chunky chip and a plain vanilla cone for herself. As they chatted and ate their sweet treat Macey asked Chuck if he wanted to see her place since they were right by it. It took some convincing just to show him her school books and music collection.

After entering Macey’s apartment Chucks speech started to slur, his feet started to get heavy and head started to spin. He must’ve collapsed on her bed because when his eye’s opened up he saw to her pulling his socks off.

Somehow Macey how managed to take his shirt off already and now was working on his pants. In Chuck’s head, he was going crazy trying to get away from this jezebel that wanted to corrupt his morals. On the outside, he wasn’t able to move a muscle. He watched as Macey finished getting him undressed.

Chuck realized that she’d drugged him.

As he lay there helplessly trying to figure things out she started to stare back at him as if she knew what he was thinking. Macey stood there in a pink Victory secret bra and panty set staring at him with what now seemed to be black eyes. She spoke with demeaning yet seductiveness tone. “I slide a couple of things into your ice cream, Chucky,” she said as she ran her nails up and down his stomach. Chuck didn’t realize it but one of the drugs must have been a viagra. His eyesight instantly came eye level to his thick country boy throbbing cock. Then back down, in an instant, Macey’s friend Toni appeared beside her.

Hot brunette with a big rack, tight ass and tattoed body, resulted in tears started to stream down Chucks’ face when he realized that Macey was a lesbian which was against his rules. The two started kissing each other with an unmatchable passion. Toni went from Macey’s tongue to her neck and finally in between her legs. Right there beside Chuck Macey resulting in her laying back and let Toni’s tongue have her way with Macey’s twat. Macey stopped her right before she came and mounted Chucks’ face. While Macey rode his face Toni slurped on his cock which sent Macey squirting and convulsing like it was her first time.

Macey knew this would be her top story for rape fetish stories to add to her diary collection.

She crouched over him, hovering there for a moment and letting him feel the heat from her cunt. Macey’s hand slide down and gripped his cock. Taking the head of it, rubbing it in between her twat lips and against her clitty until she could feel the lubrication from his pre-cum. Chuck couldn’t move but that hot cock tease put a fire in his eye. You know what she did next! She slides down as she stares right into Chuck’s tear-filled eyes. She took his virginity and showed how much she loved doing it with her evil grin accompanied by her haunting giggle.

Is your mind and loopy as mine. Do you need a sexy phone sex operator goddess as sadistic as me to take you to the edge? Call me!!