I Played a Sexy Version of the Quiet Game to Train My Sub! 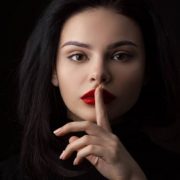 I decided to introduce this girl that I was fucking, to my version of the quiet game.

I decided to use the quiet game to train her for when silence was necessary during sex. Or maybe I just liked watching her struggle. It is what it is. Regardless, I wanted to play a little sex game, as I do love to toy with her. First, I wanted to warm her up a bit. I told her that I wanted her to look through/ inspect my drawer of toys. She opened the drawer and ran her eyes and hands over the majority of my toys and tools. She got away with skipping some because she was sexy. I specifically instructed her to pull out my paddle. We previously discussed beating her with objects as one of her soft limits, up for negotiation. I had slowly raised her comfort level to it.

After she inspected it fearfully, all I wanted was to give her a little scare; I began dragging it over her skin. I just lightly tapped it on her thighs, bonding her to the instrument. I dragged it gently across her crotch, in between her thighs and over the tops of her legs. After feeling her skin heat up, I mulled over the idea of using it on her but then decided on a little game instead. I Instructed her of the rules of my game. Starting at the outer parts of the extremities, I would touch her and caress her, slowly and gently. Every piece of her must receive my slow, soft attention, and I could say whatever I wanted to her, while she could say absolutely nothing.

I allowed her exasperated breathing sounds, but moaning was entirely forbidden. If she made a sound, I would entirely start over, and she would remain that much further away from orgasm each time she faltered. At first, her focus remained strong as I slowly work my hands up the backs of her calves and behind her knees. Then up to her thighs and over her tits, toying with her nipples. With my hands and mouth, I trailed down her front.  I kissed and licked where her groin muscles met her legs. I began berating her and making her feel reduced and beneath me. It seemed to me that this produced instant results, as she did indeed, fuck up.

I started over courtesy of her little accidental moan, right at her ankles. I worked back up and grabbed her between the legs. Done with the front, I ordered her to flip over. Grabbing her hair, I pressed her face into the pillows and straddled her ass. As I played with her tits, I reminded her that the presented position was where she belonged, as she was beneath me, face down. A small gasp/moan sound escaped her lips. I flipped her back over and much to her dismay, began caressing her calves once again. This time, her lesson was learned. As I worked my way back through the progress we made, her breathing remained focused.

I slid my hand between her legs again, playing with her while she lay face down.

Then, I pulled down her panties and began teasing her ass. No intention to penetrate, just a little scare… I lightly brushed my fingertips along the insides of her tight, little, light-skinned cheeks. My fingers brushed dangerously close to the opening, but with no follow-through. Then, after proving herself to be a good little slave, I decided that she was worthy of my wand. But first, her silence had to be reinforced. I slid off my panties and stuffed them into her mouth. I straddled her and teased her lightly with the wand before pressing it to her mercilessly. She came, obviously, and I pulled my panties out of her mouth. My little quiet game ended there.

For humiliation phone sex give me a call! Read more of my blogs to hear about my little side whore slave bitch!