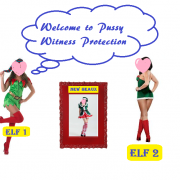 When Cat Daddy Jesus said Chris was coming to get me, I didn’t realize he meant Kris Kringle, as in Santa Claus!  That’s what I get for having an attorney that’s street name is Cat Daddy Jesus.

What in the World Have I Gotten my Nymphomaniac Self Into?

Approaching the black Tahoe, a tall lanky man dressed as a butler opened the door for me.  The sound of my name bounced off my ears like carolers in a corridor full of cobbled streets.  The aroma of hot cocoa, peppermint, cinnamon, and winter delight filled the air.  The car ride was as silent as fresh snow.  Not even an ambient sound; yet so peaceful and serene.  Another gentleman dressed in a blue executive suit spoke to me, but his words fell on deaf ears.  The holiday punch is apparently spiked, because I’m normally a Grinch, but today I felt like a pothead that had overdone it and could get no higher. Who knew I was in Pussy Witness Protection?

Awakening to a Gingerbread Whore-House Full of Elves!

Elf No. 2: She’s pretty.  Why is she covered in blood? Does she kill all of her lovers?

One would think these elves would be cold!  Like my grandmother said: “whores are never cold.”   I reckon it is true.  If you are hot in the ass, you can’t be cold anywhere but your heart.  For some odd reason, I thought someone was going to ask me if I was a good witch or a bad witch.  No one did (giggles).

Instead, the lady elves swarmed around me talking to one another as if I didn’t understand what they were saying.  After bathing me, and washing me ten times over I was so clean I squeaked.  They even gave me a peppermint enema and Ex-Lax chocolate bars in mint chocolate.  Rose oil, lavender, burdock, aloe juice; you name it! Those elves used it on me.

Elf No. 1: She’s going to be perfect for Santa’s magic candy cane.  She has the lips of a dick sucking champ!

What is Going On?

Gathering the courage to speak: “Are you preparing me for my new king? As Ruth and Uncle Mordacia prepared Esther to be queen?”

Elf No. 3: Nah!  We wash all the new heaux like chitterlings before we let master sample her.  He thinks he is Captain Save a Heaux.  You don’t need to be saved.  Make better choices!  (Runs out the room.)

Elf No. 2: Welcome to Pussy Witness Protection.  You have a magical pussy that needs to be placed here for safe keeping.  In the meantime, until we figure out what sort of magic you are dishing out that twat, keep your legs closed and wear this chastity belt (Robinhood Men in Tights style).

Check back with me on Christmas Day to find out how I do in Pussy Witness Protection at the Phone Sex Kingdom.